NEPTUNE AND PLUTO:
The combination of the silent force...

Neptune and the combination Neptune-Pluto have the starring role in the birth charts of illusionist, magicians, occultist, detectives and writers of detectives. Dutch writer Louis Couperus wrote about magic in colonial Indonesia, a.o. and he is one of my examples, together with Agatha Christie, Houdin, David Copperfield (now on my site with another birth time and a better profile:), Helena Blavatsky, Chris Angel and Hans Klok. Hans Klok is in the tabloids now because of his lovelife. You will read about that, too. 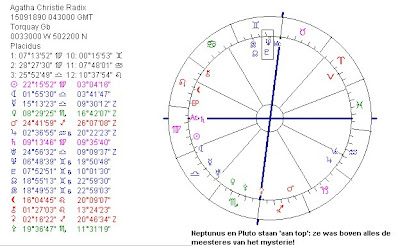 The named professions are connected with discretion and secrety. Also 'people' consider these jobs 'scary', dangerous or even threatening. What it takes to do those jobs is strong empathy and sensitivity. These words made me think of 'silent (Neptune) force (Pluto)'. Louis Couperus wrote about magic and called it 'silent force'. In his chart Neptune and Pluto are prominent, because they do not make Ptolemeic aspects in orb or sign and because Pluto is rising before the Sun. 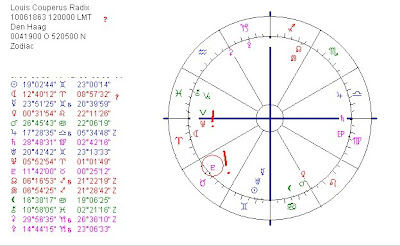 Here you see the chart of Helena Blavatsky. 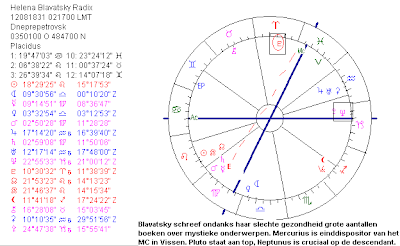 Reinhold Ebertin, in his famous Combinations of Stellar Influences, said in 1979 that Neptune/Pluto is the combination of 'the supernatural'and he connected the combination to mysticians, mediums, occultists and parapsychologiers. A good example of that is the birth chart of Helena Blavatsky, the woman who introduced karma and reincarnation in the western world. Neptune and Pluto are prominent in her chart. Neptune is 'calling' (not aspected by major aspects in orb 5d or in sign) and Pluto is positioned on top and rising before the sun for an orientation on the field of Pluto.

ILLUSIONISTS
But, with the combination of Neptune and Pluto you could also make shows full of magic!")

The very first illusionist, Robert Houdin, amazed everyone. He was born December 6, 1805. On that day Neptune was rising before the Sun.

Criss Angel (December 19 1967, close to New York) is another example of an oriental Neptune. 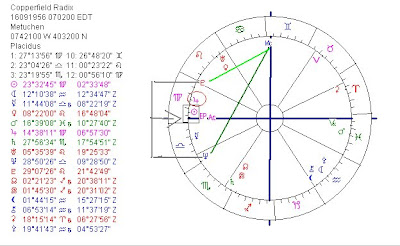 David Copperfield was born September 16, 1956 at 7h02 a.m. in Metuchen NJ, says Astrotheme.fr. My calculation program said 6:32 in NY, but given the observations I prefere the 7:02 in NJ. That time gives Neptune and Pluto connected to the MC and the crucial and most individual midpoint Ascendant/MC in the 13th degree of Leo semisquare Neptune/Pluto! He also has Mars in Pisces and Jupiter oriental for the international. 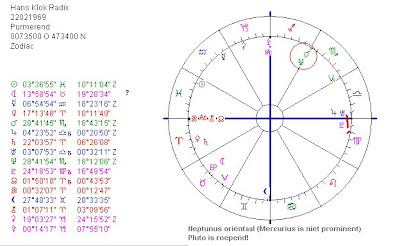 In the birth chart of Hans Klok Neptune is conjunct Mars and both are oriental. That points at working with the immaterial, illusionary etc. Pluto iin his chart, does not make Ptolemeic aspects in sign or orb 5 degree and that is what I call 'calling'! Pluto symbolises power and influence. Very often that leads into politics or 'the big money' is an issue. Hans Klok also has Jupiter conjunct Uranus for being inventive and having the ability to look ahead and surprise doing that. The calling Moon might point at the major role of habits, education, past, personal needs and desires in his life. Well, see his shows!

HANS KLOK AND LOVE
Hans Klok was born February 22, 1969, in Purmerend, The Netherlands. To line towards magic is drawn by the combination of illusions and influence. Unfortunately the time of birth is unknown, so I do not know the position of the Midheaven. But Neptune (illusion) and Pluto (influence), the magic combination, are prominent in his Astro I.D.

LOOKING AHEAD
Neptune is also the planet of dreams and romance. Maybe that is because the distance of 'real life' and you, once you fall in love:) Love is the field of turbulance right now, for Hans Klok. This year his progressed Venus joins Saturn, planet of limitations and farewells. So ended a very long relationship and he is predicting the sad end of his new love already! Maybe he had a look in his chart and saw the opposition of Saturn with natal Sun? That is an transit that might indicate a depression caused by others. .

PS dated February 27, 2009: I wrote about the chart of Ruth Rendell on Art&Astrology. See how Neptune and Pluto are connected to Sun/Moon and ASC/MC in her chart, reflecting the reigning need for mystery and the crucial importance of mystery in her life. Click the link...

Hi Marga,
This is an invitation to visit the Astrofaces project,
(www.astrofaces.com) which seeks to verify astrology for modern science with photographs grouped by sun, moon and ascendant signs. There are over 3700 photos and an abstract to explain the project in detail.
Thank you.