Chart of the late Robin Williams 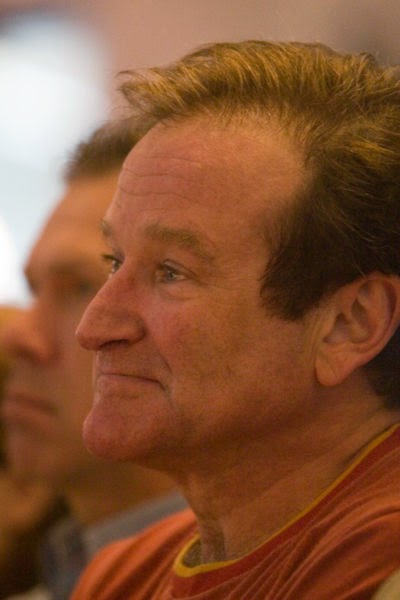 Robin Williams, a talented and beloved movie star, died yesterday. It was:

2. when progressed Mars was exactly on his natal MC. Mars is in the natal 8th house of crisis (life and death)
In the natal chart Mars is rising before the Sun. It is a position for an activist, for a do-er, for someone who is not likely to sit back and wait for the good times.

4. when the retrograding transit Pluto had been (again) opposition natal Mars and Uranus (and was on the midpoint Mars/Uranus); the Mars-Uranus-Pluto combination is about crisis.

5. with progressed Ascendant semi square the natal Sun/Moon midpoint and highlighted his situation.

6. with progressed Ascendant also quindecile (165 degree aspect) Pluto, for a focus on the planet of stress and crisis

6. when progressed Mercury ruler 8 was moving to an inconjunct with Jupiter. Mercury-Jupiter is the combination of successful decisions, but an inconjunct in between speaks of lost balance and loss.

8. and it happened to be a transit Sun conjunct Pluto day for Robin Williams. Those days are more complicated and dangerous than other days are. (As my site Astromarkt has been hacked, I can't link to the article about solar transits and the nature of the days, sorry.)

9. Progressed MC quindecile Jupiter doesn't seem to fit in the list, but there is often a Jupiter aspect involved when a person dies. Maybe because Jupiter is the planet of the great voyage... See 'Jupiter when you die': http://astropost.blogspot.nl/2013/08/jupiter-when-you-die.html

10. The important transit of Saturn had been over his Ascendant and was in the first natal house. Transits of Saturn are often depressing and force you to face the facts of life.

Also, the solar return chart for Chicago (place of birth) has Saturn on Midheaven. It might just be coincidence, of course.

On important moments in life, we use to see a lot of transits and progressions. The list above shows the amount of them on August 11, 2014. At least 5 of the above mentioned points are related to the 8th house of death, but still this wouldn't have to mirror the end of life. Astrology, like statistics, doesn't work the other way around. And it takes a natal chart to start with.

Robin Williams' natal chart has an usual pattern of artistic talent compared to the artists on my site Art&Astrology. The sensitive and amorphous Moon in Pisces opposition the planet of art, Venus is in a way (as Pisces is the 'house sign' of Neptune) a variation on the theme Moon-Venus-Neptune. Leo MC is for the star. The culminating Mercury tells us about the importance of communications. He 'quickly mastered dialects', says Wikipedia and Mercury's prominence mirrors that. Mars rising before the Sun and Out of Bounds is in line with the fact that he was called 'hyperactive' when he was young. The inconjunct of Sun and Chiron shows us that there is something wrong and healing was needed (from the start).

Here is the chart with transits and progressions for yesterday.

Thanks for your comment, Livia. I mentioned the (almost) exact aspects for the final days. Progressed Sun-Saturn was before (and as we heard later, he was told he had Parkinsons' disease, before). P Sun moved to that square with the Moon, but the aspect hadn't perfected. Perhaps this signals the growing discordant emotions, yes.

Hw was born 14 hrs before me

These cardinal transits are brutal

The hour of birth in this case shows to make a difference. Lots of the mentioned aspects are abt his MC, AC and Moon. Indeed, the cardinal aspects ARE brutal...