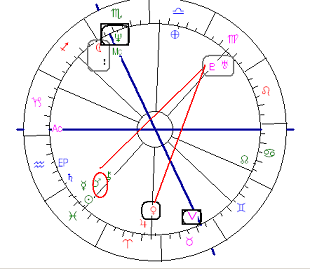 
Bertrand Cantat is the singer of the group Noir Desir, born 5th March 1964 in Pau (France) at 5:30 a.m. Here you see his birth chart. In 2003 he beated his female partner (Marie Trintignant, daughter of the famous actor) to death. He was sentenced for 8 years in prison but he will be released for \'good behaviour\'. You can see his picture on the site of De Morgen

Look at the chart and see a prominent oriental Mars, afflicted by Uranus and Pluto. This is a statement for using violence and a quick temper. Venus is connected to this by a sesqui square with Pluto. For the artist in the chart see Neptune on the MC, end ruler of the MC-routing and the crucial Venus square the Ascendant.

PS The victim, Marie Trintignant, was born 21st January 1962. On her day of birth Pluto was sesqui square Mars/Saturn and the calling (unaspected) Mars made a 135 degree aspect with the midpoint Uranus/Pluto. On the day she died Mars opposed to Pluto in her chart and Pluto made a semi square with her natal Saturn. Thus another combination for dangerous violence and possible unnatural death was created, connected to her chart.
Geplaatst door Astromarkt op 12:26 PM