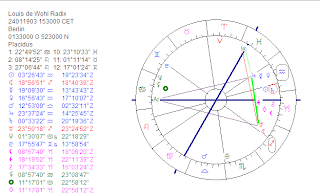 The files of MI5 revealed the name of Louis de Wohl, born 24 January 1903 at 15h30 CET in Berlin. He was working as a spy/astrologer in the Second World War. In those days people believed that the strategic successes of HItler were due to his relationship with an astrologer and using an astrologer to find out the next moves Hitler would make based upon astrological findings seems to be a good idea. De Wohl was not very popular among the James Bonds and although even those spies could not prove it they thought he was a charlatan. However, he was rewarded with the British nationality on behalf of a major Lennox, who said that he had been valuable for the allied forces. Read this and more in The Independent. And he did predict that Hitler would lose in the end (but not exactly when that would be).

NEPTUNE
In his chart Neptune is the most prominent planet. Neptune is not aspected by major aspect in sign (and so: 'calling') and square Aries Point. Neptune disposes of the Midheaven. That might point at fantasy, belief, ideals and uh...fake things...at any possible level. Saturn is oriental and this connected with the lack of placements in earth signs activates the search for material things and security. Saturn is inconjunct the prominent Neptune. So maybe there was a certain disbalance between his ambition and his spirituality.

Accidently his Sun is on my Moon and my Moon is on his Sun. My Node is on his MC, too. The rule of 3 maybe provoked that I had the drive to give some positive attention to the chart of De Wohl. Or is that Neptunic?:)

BTW In his solar return chart Uranus is on the IC. Transit Uranus is now semi square his Sun. Neptune is inconjunct his Ascendant...And so his name got in the papers and not in the most positive way.