Chart of Edward Kennedy, his death and his brothers

Edward Kennedy's brothers John and Robert were murdered, shot. Edward Kennedy lived to be 77 years old. Of course, the big difference is that Edward Kennedy never was a member of the USA government and never was the ultimate candidate for the Democratic Party. Those are circumstances just like the changing times (he was the youngest brother). But, can we also see that difference in level of danger in his chart? Yes we can.

His brother Robert had an important Saturn. Saturn was rising before the Sun and ruling the Midheaven at the time and place of his birth. Moon and Jupiter were on top of his chart; Venus and Pluto were on the meridian. Also, Mars doesn't make major aspects in sign or orb 5 degrees. Saturn, Pluto and Mars hold PROMINENT positions in the chart. The complete pattern of unnatural death is PROMINENT in his chart.
The Scorpio Sun (ruled by Pluto) and Capricorn Moon (ruled by Capricorn) make him a 'die hard', someone who easily makes enemies and who is a keen politician, too. Notice that his Ascendant is in Aries (ruled by Mars), so that the same pattern of Mars, Saturn and Pluto is again highlighted in the character.

The important position of Pluto, ruler of the 8th house of life and death, opposition his Midheaven is reflecting the meaning of his death in a public place or related to his public function. His Sun was inconjunct the Ascendant (on the cusp of the eight house). 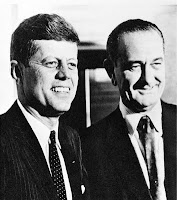 Brother John had Saturn on top of his chart, an unaspected Pluto and Mars rising before the Sun. Mars is semi square Pluto (political struggle is one of the possibilities with this aspect; using force, influence or violence or...having to defend yourself is another possibility). The planets of the principle of unnatural death were all three PROMINENT in his chart and the world remembers him mostly because of his untimely death. Also, ruler 1 Venus is in the 8th house of life and death and also ruling the 8th house. The Sun was positioned in the eight house.

EDWARD had the issue of unnatural death in his chart and he dealt with the issue. Unlike his brothers’ charts his one does not have a prominent Pluto. Pluto's opposition with the Ascendant is a bit too wide (more than 5 degrees). And the ruler of the eight house is not prominent and doesn't have a relationship with the Midheaven of with the first house. The Sun is in the second house (opposition Moon and Neptune in the eight). The opposition can often be ‘translated’ into ‘others, someone else’. Someone else died and that strongly influenced his life.

So, the indications in his chart are not as strong as they are in the charts of his brothers. This, with the fact that his position never was as influential and dangerous as his brothers’ positions, allowed him to become 77. If you want to read more about his chart, read on… 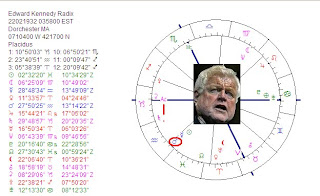 Death and obstacles for the career
Mars is semi sextile Saturn and biquintile Pluto: violent, unnatural death causes were certainly part of his life.

He lost his brothers by violence and he was involved in the accidental death of a secretary (who was his lover). The affair cost him the chance to be a president, forever. He left her death body in his car without warning the police and went to sleep. That was on July 18, 1969, with transit Mars square Sun and semi square Uranus (being hit, hurt, an accident; see the article about accidents on Astromarkt.). He was lucky to have brothers in the government to support him (progressed trine of Jupiter and Midheaven) in that period. But he could never step in his brothers' footsteps anymore.

Unaspected Saturns ruling the first house warn for the possibility of rise and fall at any possible level. Nevertheless he gave it a try in the 1980 pre-elections with progressed Sun and Mercury square Pluto ruler Midheaven, but Jimmy Carter had better cards and so he gave up on August 12, 1980. Neptune was trine progressed Sun, trine progressed Mercury, trine progressed Uranus and inconjunct progressed Pluto. It was a good moment (trines) to give up and withdraw (Neptune) even though it had a price (Pluto). Also transit Pluto was opposition Mercury and Uranus and square Pluto. He was forced (Pluto) to change his mind (Mercury-Uranus). It was a bad sign that Saturn was on the Ascendant of his solar return chart in 1980. This position made it clear that it was time to fulfill the promises of Saturn's position in the natal chart. His ambitions had reached a limit. Other nasty conflicts in the chart are Sun semi square Uranus (for being part of a controversy) and opposition Neptune (for being a suspect, or being seen in a negative light). These aspects contributed to the gate that marked the dead end road to the top.

The Moon conjunct Neptune and biquintile Venus may be fortunate aspects for artists or for people who need vision and style in their job, but in the chart of others it might lead to romantic affairs and divorce. He married twice.

HONOUR
Later Edward Kennedy did a good job as a senator, especially since about 1995. In that year the Sun and Midheaven in the progressed chart were about 120 degrees apart (a trine) and also trine Neptune. There was, in other words, a grand trine of Sun, Neptune and Midheaven. It was after his second marriage (with Victoria Anne Reggie) in 1992. It must have been a marriage that changed his life and lifestyle, because his progressed Sun changed sign in those years!

With Jupiter 112.5 d from AC/MC and Pluto sesquisquare Sun/Moon in the natal chart there was enough strategy, authority and support. The official honor that he receives after his death fits with position of his progressed Sun trine progressed Midheaven. This aspect is full after his death and was within an orb of 1.5 degree since his second marriage. From that moment on he started to have an appreciated and honorable position in the Senate.

A remembered affair (Moon-Neptune) influenced his career (sextile Midheaven), but he didn't stop and continued his work in politics. The effect of Saturn is that one does his duty and makes career, anyhow, even after the fall.

LINKS:
All about the Kennedy’s on this blog: http://astropost.blogspot.com/search?q=kennedy