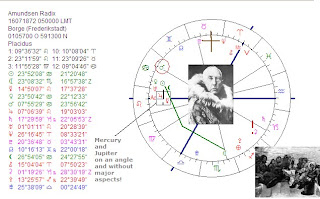 On June 18, 1928 Roald Amundsen disappeared when he was flying near Spitsbergen. On that day Mars was square his natal Sun and Venus, while transit Uranus was trine Jupiter. These close aspects tell us that he might have been hurt. The trine between Jupiter and Uranus refers to a 'relief' (and sometimes even dying is a relief: see the earlier post). Right now they are trying to locate his lost plane (that perhaps contains his body) with new scientific methods, searching 40 square kilometers of the sea. That is reason enough to have a look at his chart. In short his chart tells us that the influence of Neptune (sea, hidden things), the Mercury-Jupiter! angularity (travel, anyhow, anyway and the fixed 'dog star' Procyon all contributed to his life style and death. The final accident is reflected by the importance of Mars - ruler of the Midheaven and rising before the Sun - half semi square the unaspected Uranus.

Together with his family background, the historic scene and his interests in his teenage years, those are the components to create the single strongly driven traveler and explorer who one day vanished at sea. Above you see the chart that I will explain below.

MERCURY AND JUPITER HIGHLIGHTED: TRAVELLING!!
Mercury and Jupiter are highlighted in his birth chart and they were again highlighted in his teenage years. Mercury and Jupiter are the planets of traveling and 'broadcasting' messages. Amundsen told the world about his discoveries and traveled from the North Pole to Alaska. This is how the planets became a vital part of his astrological ID:

1. By angularity
Mercury and Jupiter on the Ascendant, the planets of transport and traveling are of crucial importance in this chart!

2. By the lack of aspects
Mercury and Jupiter don't make Ptolemaic aspects in sign or orb 5 degrees. I name that 'calling' planets. These planets are important for a vocation and lead to activities of the planets’ kind at any possible level.

3. By the combination with Sun/Moon
(Ascendant = Mercury/Jupiter = Sun/Moon = Saturn)
This combination of midpoints with the Ascendant tells us that was motivated to traveling and communicating and that this was strongly related to his environment and presentations and that ambition and a certain 'cool' and hard attitude was involved.

4. By progression
The progressed Sun was conjunct Jupiter and Mercury when he was a teenager. So, in the important period of growing and making choices, Mercury and Jupiter (the most important combination in his chart) were highlighted (by the Sun). The progressed Sun shows how your life 'continues' and how a person develops. Amundsen's natal drive to travel developed in his early years!

So we can be certain that he was a traveler, an international, someone with a message.

But there is more that directed him to the kind of life that he lived. Like in most charts it is the complete picture of the birth moment in time and place that is reflecting how and why a person becomes who he is. In this case also the environmental and genetical influences (reflected by Ascendant and Ceres) are important. Every chart should be read knowing the background, economical and social circumstances and historical situations. They are WITH the natal chart and progressions the parts of the puzzle of the individual identity and his life style. Here is more about his Astro ID (see the picture of his chart):

- Mars rising before the Sun: that is a statement for action, activism, competition and energy! He strongly competed with another explorer, Scott. In 1888 (age 15/16), when he decided to become an explorer, Mars was on the Descendant of his Solar Return chart (birthday of 1887).
- There are no planets or lights in air signs and no planets or lights in movable signs and that places communications and flexibility (moves) in the spotlights: at any possible level!
- His family roots: ship owners and captains...We see a ‘calling’ Ceres (symbol of the roots and genes) at 157.5 degrees from AC/MC to show the crucial importance of the genes and roots at any kind of level...
- Uranus, not aspected (not within sing or orb 5 degrees by Ptolemaic aspects) shows us that adventure and excitement, together with shocks will be a major part of his life and life style. Uranus, half semi square Mars, reflects the hot temper and the possibility of accidents. See my site Astromarkt...

NEPTUNE
Neptune is often involved in case of disappearances. Neptune is the symbol of hidden things, the things that you cannot see or that remain a secret to us, the sea, visions, fantasy and...very far journeys overseas.

In the chart of Roald Amundsen has Sun and Venus square Neptune in the natal chart. Neptune is quintile his Mars and semi square AC/MC, just like Sun and Venus. Netpune is important.

NEPTUNE/PLUTO
The midpoint Neptune/Pluto (the combination of mysteries and discretion) is exactly on top of his chart. This combination is also important in the charts of magicians, detectives and spies and in the charts of those who do a job that others may consider to be abnormal or paranormal or 'strange'. Neptune/Pluto is perhaps also the signature of those who explore and discover the world 'behind' the obvious, visible and known world. Now that they are searching for his remains, we see Neptune on the Descendant of his Solar Return chart to demonstrate that disappearance and mystery is (again) of importance regarding his name. On October 11 transit Neptune will beactly inconjunct his natal Sun and that aspect is already active today. I wonder if that is a positive sign. When people vanish (or want to vanish) Neptune is active, too. And this aspect is also seen in cases of nasty revelations. We will see...

Read also about Neptune and Pluto's effect in general and in the charts of spies...or click the label below for more examples of and info.

Perhaps the fact that his Sun (ruler of the Ascendant) and Venus were conjunct Procyon at the time of his birth contributed to his life style or more to the way that he died. William Lilly said that the influence of Procyon 'designs a petulant saucy fellow, prone to anger, proud, careless, violent, giddy', even though Procyon is supposed to be a star that promisses success (and carries the danger of a fall later). Those aggressive tendencies are perhaps qualities needed to become a driven explorer in isolated places, but they may not have been fortunate for a happy social life.
(Link to site about Procyon:http://www.constellationsofwords.com/stars/Procyon.html)

PRIVATE LIFE
Amundsen didn't seem to have a private life or a lover, if you read Wikipedia only. I found an interesting bio on fram.nl (http://www.fram.nl/faq/name/amundsen.htm). I read that he had a lover (a married woman; the affair caused a scandal) and that he once adopted two Inuit children. He sent them back to Siberia when he was bankrupt, saying that it was 'just an experiment'. He never married (Mars half semi square Uranus + Venus square Neptune) but he liked women (Moon trine Venus in Cancer) though he wanted to keep some distance (Moon and Venus square Neptune) and didn't want to be a family man. He seems to have been a romantic person (with perhaps a need to escape reality that led him to a journey to escape real life).

He was a traveler, he had the drive and the ambition and he sure wanted to escape daily life. Those are the components for a single explorer, who was able to leave comfort and loved ones (behind) to explore strange (Neptune/Pluto) worlds.

PS Just type 'disappearance' in the left upper corner of this blog astropost.blogspot.com and search this blog for examples. You may be surprised to see that Neptune is always there when someone vanishes.

*)Amundsen used dogs, one of the reasons why he could have more success than Scott had. He learned how to use dogs from the Inuit. As it happens, Procyon means 'before the dog'. Procyon is the brightest star in 'Canis minor' (Sirius is much brighter in 'Canis major').