A natal chart shows the profile, the character and the important issues in life. What happens next, following birth, is shown in transits and progressions. Of course: related to social position, history and culture. The same positions and aspects don't reflect the same kind of life. That said, I like to show you the resemblance of two charts and the resemblance of two lives. 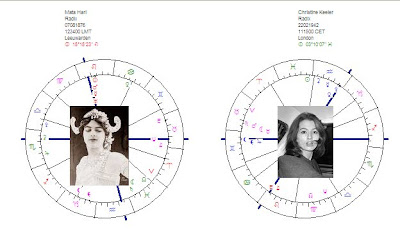 These are the charts of Christine Keeler and Mata Hari. Observe the 7 important and prominent shared components of their charts. In this post I will also show you how the most prominent planetary combinations in Mata Hari's chart at birth are present at the day of her execution (activating the natal positions). Meanwhile I introduce (or I recall, for those who have visited my blog before) the effect of Neptune-Pluto and Mars-Uranus, with a few links (scroll down) for more information.

WHO ARE THEY?
Christine Keeler is the famous call girl who slept with John Profumo AND a Russian guy, Yevgeny Ivanov. Mata Hari is the oriental nude dancer who was executed during the First World War after accusations of being a spy. If you are interested in the artistic side of Mata Hari, see Art&Astrology.

WHAT DO THEY SHARE?
Both ladies earned their money in the sex industry and both got into trouble because of the fact that they slept with 'both sides', one in a real war and one in the 'cold war'. They share more. They both lost a child and were not lucky with male partners. And there is much likeness in their charts.

What their charts share are:
1. Mars conjunct Uranus, tightly, for an extraordinary drive (or special sexual activity)
2. Sun on top, for drawing attention
3. Important Pluto (symbol of money and sex and politics). In the chart of Mata Hari Pluto is the first outer planet rising before the Sun. In the chart of Christine Keeler Pluto is on the IC (opposition MC).
4. Neptune is equally important in the chart of Mata Hari (on the Descendant) as in the chart of Christine Keeler (first outer rising planet before the Sun, opposition Aries Point).
5. 23rd degree of fixed signs. Christine Keeler has Mars conjunct Saturn in the 23rd of Taurus. Mata Hari has Jupiter in the 23rd of Scorpio and the Midheaven in the 23rd of Leo. See 'OFF TOPIC', below.
6. Neptune and Pluto are both prominent and related to the Sun (Mata Hari has Sun square Neptune/Pluto; Keeler has Sun opposition Neptune/Pluto - a midpoint yod pointing at the Sun).
7. Ceres is important. IN Mata Hari's chart Ceres is on the Ascendant, in Christine Keeler's chart Ceres is the first object rising before the Sun. Ceres symbolizes 'mother nature', the forces of nature and nurture. (BTW Ceres is the mother of Proserpine, who was taken and raped by Pluto and forced to live with him in winter.)

It is the combination of the shared items that does 'it'. Their charts reflect the importance of being a 'starry' but discrete woman with a special urge to be independent and adventurous. And notice how politics (Pluto) influenced their lives. In the chart of Mata Hari Mars and Uranus are conjunct Midheaven. Uranus on Midheaven is reflecting controversy. There is still controversy about the question if she was or was not a spy.

MATA HARI's BIRTH CHART AND DEATH
In the chart of Mata Hari Sun, Mars, Uranus, Neptune and Pluto are more important than the other positions in her chart. Sun, Mars and Uranus are on top or on the MC. Neptune is angular (on the Descendant). Pluto is the oriental planet (as Pluto is the first outer planet rising before the Sun). Mars, Uranus, Neptune and Pluto were all active when she was executed. 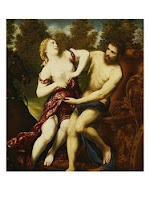 Transit Pluto was square progressed Midheaven and inconjunct progressed Ascendant on the day of her execution. Transit Mars was conjunct Uranus (activating the existing Mars-Uranus conjunction on the day that she was born). Neptune was square natal Ascendant....Notice how Neptune and Pluto (the most important planets in her natal chart) were present on the day she died. That was the day that she became legendary. Uranus' transit on the day of the verdict is also very telling!

The most important planets in her natal chart were making tight aspects on the day that she died.

RELATED:
The artist in the chart of Mata Hari

Neptune and Pluto, the silent force
In this post you read how people with important Neptune-Pluto combinations work or live in an atmosphere of discretion, secrets and mysteries

Mars and Uranus in aspect or midpoint
Mars-Uranus combinations reflect the urge to make changes and go fast. And the extraordinary drive and energy to find excitement. It is an important aspect in the charts of terrorist, freedom fighters and ...accidents: all those who want to live life the fast and drastic way (sometimes in sports).

About missing people (and those involved or suspected)

The 23rd degree of Taurus is related to Capulus

The 23rd of Scorpio is related to Alpha Serpentis

PS In August 1961 Christine Keelers' progressed Midheaven was in the 23rd degree of Aquarius (square her Mars and Saturn). That is when Profumo wrote her that he couldn't see her anymore and that is when Christine Keeler was 'notorious'.

PPS
Xaviera Hollander (The Happy Hooker) was born on 15 June 1943 in Soerabaja Indonesia and she has Mars septile Uranus . Maybe Mars-Uranus in the chart of women can also refer to adventures (Uranus) with men (Mars) or to controversial (Uranus) jobs (Mars)? I will be back later with Mars-Uranus-female charts.