The astrology of Maria Callas and Aristoteles Onassis 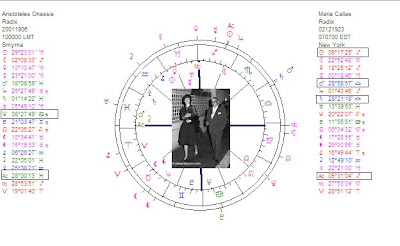 Maria Callas loved Onassis, but he preferred to wed Jacqueline Kennedy. She never got over it. It was a love drama.
That romantic drama was reflected in the inconjunction of his Neptune with her Sun and Ascendant. But...their natal charts (personalities) were difficult enough to make long lasting relationships a serious problem.

Mars-Saturn, Venus-Uranus and Sun-Uranus are 3 of the 4 combinations indicating divorce in a woman's chart. Three out of four is a lot. (The fourth is Sun-Mars affliction). It must have been difficult for her to find a match who respected her independence.
Maria Callas had been married before, but she divorced. Note that her Sun and Ascendant are conjunct the fixed star Antares (heart of Scorpio) that (according to astrology.com) reflects honours, sudden los and several marriages.

In his chart we see:
- Venus quindecile Neptune,
- Moon square Saturn,
- ruler 1 oppositoin ruler 7,
- Moon biquintile Neptune and
- Mars quintile Uranus.
He has all of the possible indications for divorce in a male's chart!

So let us face it: they were not really made for longlasting relationships. There were also two important indications that this specific relationship would not last:

1. The inconjunction of his Neptune and her Sun/Ascendant almost promises romance (Neptune) without balance (inconjunction) and loss (inconjunction) with grieve (Neptune). And that he would disproportionally disappoint her in her dreams about him. And Aristoteles had Venus and Moon in minor aspect with Neptune. He was a womanizer. He had been married before, too.

2. Her Mars-Saturn conjunction (indication for separating from a man) was inconjunct his Ascendant.

Conclusion: they were made to not get together (for long).

Celine Dion is a fan of Maria Callas. Read about it on Art&Astrology.