THE LUCKY CHART OF GUUS HIDDINK (going to Chelsea) 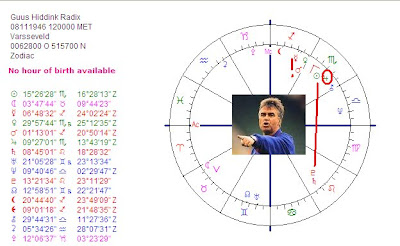 Chelsea is lucky. They got Hiddink! Guus Hiddink is the best coach I know and that is not just because he is Dutch:). He is an international (Jupiter rising before the Sun), he has authority (Sun in Scorpio sesquisquare Aries Point and square Pluto) and he managed to make winners of losers (like in Korea and Russia). His Mars is 'calling' (not making aspects in sign or orb 5 degrees) for a special drive! His chart is reflecting successful action and a strong will (many placements in fixed signs). He was born in Wisch (now part of Varsseveld) on November 8, 1946.

JUPITER AND URANUS
There is a progressed inconjunction in his chart: Sun inconjunct Uranus for a sudden and maybe disproportional or unbalanced change or move in life. It is a change with a 'but', like always with inconjunctions. He is going to do this as a favor to the Russian owner of Chelsea and just for a period of time (interim). Nevertheless, there is also Uranus trine progressed Jupiter (for a relief; maybe it is cold in Russia:). Transit Jupiter is square his natal Jupiter and opposition his Saturn (for the advantages of disadvantages) and transit Uranus is square his natal Uranus. A lot of Jupiter-Uranus and some difficulties coming along, but it looks like he is going to experience a pleasant - though perhaps short term - move to England.

RELATED:
See the labels below!