Chart of Woody Allen and the abuse accusations 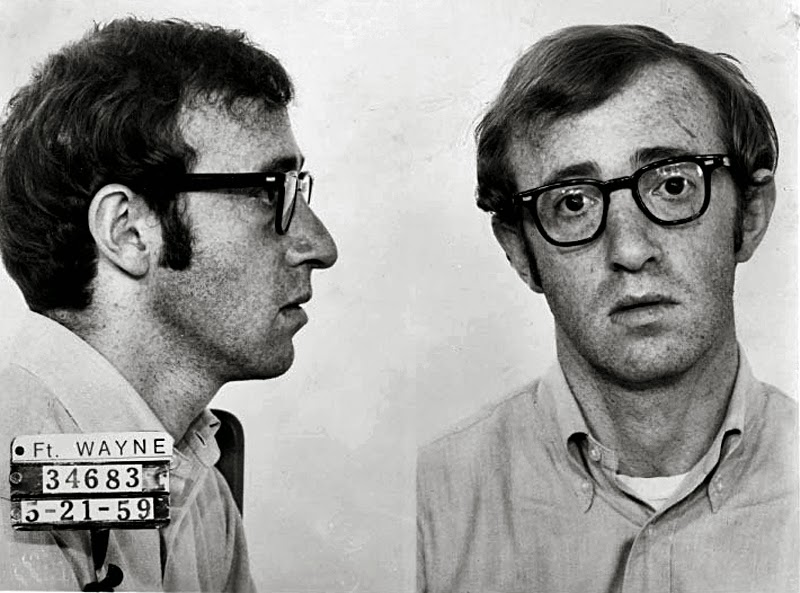 Dylan Malone's open letter in the New York Times accuses Woody Allen (again) of child abuse, shortly after receiving the Cecil B. DeMille Award for lifetime achievement at the 71st Annual Golden Globe Awards ceremony on January 12, 2014. What transits and progressions go along with such a moment?

First: Who is Dylan?
Dylan was 7 years old when she told her adoptive mother Mia Farrow, that Woody Allen - whom she had a living apart together relationship with - had abused her. Her mother believed her, but psychologists said they didn't and the judge believed them more.  Here are the transits and progression for May 13, 1994, the day of the verdict. Watch Jupiter! Transit Jupiter is square the Progressed Sun of Woody Allen, showing the positive verdict.*) There is no such Jupiter right now.


DYLAN: JULY 1 or JULY 11?
The day of birth of Dylan is not clear. Some say July 1, but several sources mention July 11, 1985 for the day of birth of Dylan Malone Previn. So, let's say that it was 1985, so that 1992 (when Dylan was 7 years old and the incident happened) was the year that Woody Allen had transit Pholus (symbol of turning point and the risk of shooting your own feet) opposition his natal Mars. Mars is afflicted and in his 5th house of children, play and entertainment. Transit Pholus opposition Mars is a turning point in the field of Mars (that is: work, action, drives and sexual activities).  Later T Pholus was conjunct Pluto, mirroring the pyrrhic victory. It was the year of Pholus in aspect with Mars-Pluto.

If Dylan was born on July 1 (as Lynn Hayes - AstrologicalMusings - says here, the synastry shows this:

a. her Sun in the 10th of Cancer is inconjunct his Sagittarius Sun
b. his Pholus is opposition her Sun

MARS-PLUTO in 5-11
Woody Allen's Mars in V is afflicted by Pluto XI. The 5th and 11th house are exactly the houses of natural children and adopted children/stepdaughters and sons. Mars-Pluto is the symbol of the drive to dominate and win, intensifying energy and aggression and sometimes mirrors the use and abuse of power, force and influence. It is a great aspect in sports (a Belgian athlete was born the same day), but it is a dangerous one, too (see Astromarkt on Mars-Pluto). Venus-Mars-Pluto combinations like in Woody Allen's chart intensify passions.


Regarding Mars in 5 (afflicted): He is not a playboylike Hugh Hefner, but just like the Playboy chief he likes to marry young women. That is OK in larger parts of the world, but when the woman is in fact an adopted stepdaughter, lots of eyebrows rise.

In 1992 with transit Pholus aspecting Mars-Pluto in V-XI came the first accusation by Dylan. This certainly changed his relationship with Mia Farrow. The limit was that he married one of her adoptive daughters. Mia Farrow has two reasons to have doubts about Woody Allen: Dylan and Soon-Yi, so it is not surprising (given her prominent Mars) that she attacks him. For the record, here is Mia Farrow's chart of the moment (with T&P). Transit Neptune inconjunct her Progressed Moon shows disappointment and sadness.
MARRYING YOUR STEPH DAUGHTER
Woody Allen married Soon Yi, a daughter previously adopted by Mia Farrow and Alain Previn and part of the large family of adopted and natural children. After his marriage with Soon Yi, Allen again adopted two children.

Here is the synastry of Woody Allen and Soon Yi (they have been married for many years now). There is a Jupiter-Neptune connection (worshipping) and a Venus-Uranus synastry (falling in love again and again).

WOODY ALLEN TODAY: TURNING POINT
What transits and progression does a man have who was awarded one day and faces accusation the next? Like this:
We see the mix:
- Neptune has been conjunct Saturn lately (involuntary detachment)
- transit Uranus trine his Sun (a positive change)
- the progressed MC trine Sun (honor)

- transit Uranus square Pholus (unexpected turning point)
- progressed MC moving towards inconjunct Pholus (turning point with a loss involved, unbalancing change, losing status and shooting your own foot)
- transit Neptune square Mercury: that is the kind of aspect to expect when there is a rumor, miscommunications and/or accusations as transits of Neptune are always confusing (unclarity about the facts)

- and all that happens with the progressed Sun in the latest degrees of a sign, signal of changes in life and life style

We can't judge on the basis of astrology.
Not, because Mercury-Neptune is the theme of miscommunications and not necessarily by the owner of the chart.
Not, because Mars-Pluto is just as frequent in the charts of those who have to deal with violent men or the impact of war or the pain caused by training.

Charts have to be seen in the light of the events. Charts don't judge, people do. You have to add circumstances, culture, gender, genes…and when it comes to two people: the interaction between their (progressed and natal) charts. So in the end, you only know what kind of aspects accompany accusations of child abuse.

It is unlikely that Woody Allen would be prosecuted again, because there is no physical evidence and Dylan seems to be the only one who accuses Allen of child abuse. It might remain a mystery that is hanging over Woody Allen like a dark cloud and is a tragedy for all involved. Only Woody and Dylan know the truth, so it is a  matter of believe. That is very Neptune, the 'calling' planet in Woody Allen's chart.

How odd to set this man in the lime light with an award,  knowing that there is such a controversy! It is the same as with Roman Polanski of whom they said that it was so typically French to support a man in spite of his possibly controversial sex life. It's not so typical at all:). And just like in Polanski's case, the award had a price: spotlights on the accusations again...

On the synastry with Mia Farrow:
http://astropost.blogspot.nl/2009/03/famous-couple-woody-allen-and-mia.html
A Sun-Venus aspect in the composite chart didn't overrule the Mars conjunct Mars (fire and fighting)

Roman Polanski's natal chart also has a Mars-Pluto conflict (a square) with Venus involved. During positive transits of Jupiter he was allowed to go to Switzerland to receive a prize
http://astropost.blogspot.nl/2010/07/roman-polanski-and-jupiter.html

*) In many cases Jupiter mirrors a fortunate verdict, see about 'The jolly judge' http://astropost.blogspot.nl/2013/07/jupiter-jolly-judge.html