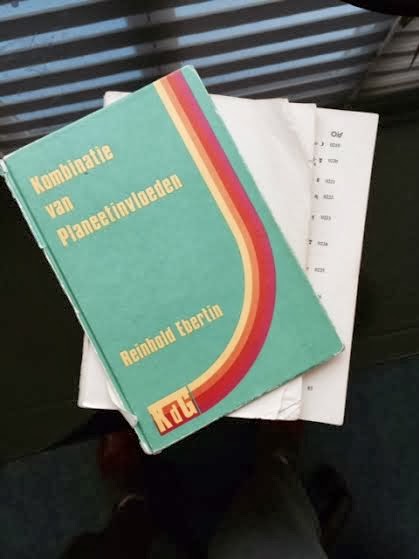 Today is the birthday of Reinhold Ebertin, the author of my favorite astrology book: Combination of Stellar Influences. My Dutch version of the book is already falling apart, as you see above, but I also have a new English one.

I wrote about the astrologer in his chart, before, in 2008. Today I corrected this post and I added that the German Wiki informs us about sympathies for "Nazi" theories, demonstrated by publications and membership of a dubious club. Before, I heard that he was arrested in Nazi time. It is very much in line with a Sun trine Neptune aspect, this unclarity…

It doesn't change the fact that COSI is one of the best books if you want to study astrology. There is nothing controversial (politically) in that book, that was translated in 1961 and first appeared in 1960. That happened to be the year that transit Pluto was conjunct his Mars and therefore trine his Jupiter (he had a tight Mars trine Jupiter in the natal chart). That is a combination that he described as a 'brilliant success'! Here is the chart with transits and progressions of 1960.

About the astrologer in Ebertin's chart:
In the natal chart Jupiter is on the Ascendant (conjunct Chiron). The Sun is septile this prominent Jupiter and quintile Uranus. Also, Uranus in Sagittarius is semi square Sun/Jupiter.
Jupiter-Uranus combinations (the helicopter view) are almost always seen in the charts of astrologers and those who study astrology.