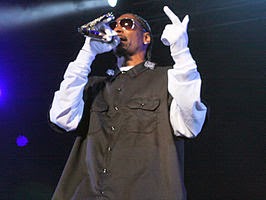 You know that every and any chart should be considered with age, gender, genes, social situation, conditions and culture in mind. Here is the chart of Snoop Dogg, a famous AND notirious rapper. He is the news because he keeps dissing Iggy Azalea (see this link). No surprise, because his Venus inconjunct Eris just loves to create discord!

RAPPER
A rapper is telling his own rhythmic tales. Communications and rhythm is what you need, and it helps to have a difficult background. The astrologic word for communications is Mercury. His Mercury doesn’t make any aspects in sign or orb 5 degrees and that is what I call a ‘calling Mercury’. When you have Mercury calling, you can’t resist to talk, talk and talk, so telling stories is your thingJ.). His Mercury is conjunct Ixion (symbol of ‘the bad guy’) and both are inconjunct Saturn. Mercury and Ixion are at the midpoint Sun/Moon. That increases the motivation to communicate along with a ‘gangsta’ issue (Ixion).

There is also a ‘calling’ Uranus, rising before the Sun. This VIP Uranus is a VIP rebel, like Snoop Dogg is.  But Uranus is also the symbol of rhythm and acceleration.
Mercury (voice, pen), Uranus (rhythm, rebellion) and Ixion (gansta): a recipe for rapping.

ASTRO ID
Uranus calling and rising before the Sun, ruling the 11th house of friends and communities
Mercury calling
We have fast talking here and controversial opinions (making a change by means of communications).

There is a pattern indicating issues related to making money and values (Taurus-Scorpio-Libra). There is a Moon conjunct Venus for sense of style and what people like. And the mentioned Venus (ruler Sun) inconjunct Eris links the charming Libra to excessive disagreement. Libra likes a good atmosphere, but Venus inconjunct Eris can't resist to throw apples:).
Snoop Dogg was born with 5 placements in air signs AND a calling Mercury, so that there is a strong focus on communications and the use of voice or pen. And he happened to know a lot of rappers!

MIDHEAVEN ROUTING
Midheaven’s ruler Saturn in the 2nd house and the lack of placements in earth signs (except for the AC) tells us about the need to get material security. Because of ruler 10 in 2 this is related to public (10) appearances (2 is 5 of 10). The most narrow aspect with Midheaven is made by Pallas, the symbol of (repeated) patterns.

Venus-Pluto’s mutual reception finally disposes of Midheaven in Capricorn, ruled by Saturn in Gemini in the 2nd house. That strongly refers to making money, again.

Now we got a person who is involved in public appearances (television, theatre), eager to make money and very capable and motivated to communicate (fast and furiousJ). As he is surrounded by rappers and living in a  ‘gangsta’ culture, it is more likely that he would become a rapper than an author.

But how did he become famous?

PROGRESSED MOON-JUPITER
When he became known (release of movie April 1991) transit Jupiter was square his Sun/Moon midpoint with Mercury and Ixion, but so was Saturn. There is a Jupiter-Saturn opposition in the natal chart. Such an aspect adds disadvantages to successes and vice versa. There was a progressed Moon trine natal and later progressed Jupiter in that year. That is one of the best progressions a person can have. As there was much exposure, his rap became a success.

I see none of the usual indications for success (Jupiter-Pluto combinations or Mercury-Jupiter), just Jupiter/Neptune with Midheaven (an audience) and Jupiter/Uranus conjunct Venus (sudden artistic windfall). Maybe you do?

Perhaps the right moment (Moon-Jupiter in April 1991) was enough for a fast and controversial speaking gangsta man with an audience in the best period for rappers.


Here you see the chart of Snoopy Dogg, not so ‘snoopy’ and sweet in his fittie with competing female rapper Azalea. Watch the Mars-Sun and Mars-Saturn synastry!