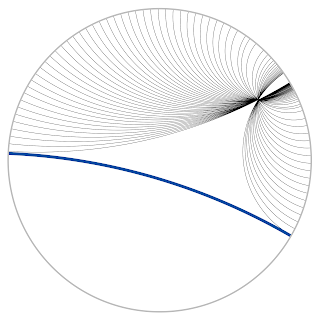 This is a sort of a follow up on declinations. I wrote about Out of Bounds positions earlier (http://astropost.blogspot.nl/2014/01/out-of-bounds.html ). There I explained what declination and OOB is. Now I want to brainstorm a bit about parallel and contra parallel aspects. How to find these aspects? Well, go to Astro.com, select the Additional Tables. Every Sun, Moon, MC, Ascendant and planet has a declination degree, minute and second and a position S (South) or N (North). Use a 16' orb and try to find those positions that come close (for example 23d50m10sN and 24d02m06sN) or those positions in contra parallel (like 23d50m10sS and 24d02m06sN). Is there any contra parallel in your chart, than ask yourself: am I aware that this aspect is important for me? I think that contra parallels are not so obvious as parallels are, just like they are not so obvious from the point of view of one of the objects. But first I want to show you some examples.
On August 4, 1961 POTUS Barack Obama was born. On the same day, in my country, two persons were born who make their living by means of communications. That day, there was a beautiful parallel combination in the sky: Mercury 20gr41m48s N, Jupiter 20gr35m24N and Pluto 20gr34m1sN. Mercury, Jupiter and Pluto made 'common aspects, too: Mercury opposite Jupiter and quintile Pluto. So, there is a double combination to indicate a big amount of words, success by communications and the possibility of earning money singing, writing, negotiating or speaking. The declination aspects support the usual aspects. Obama, as an extra, has Moon parallel Descendant AND trine Jupiter for popularity. That made me think about other American top politicians. Did they have such parallel, too? And how about others?
This mix makes you see that it is not easy to find the meaning of parallel and contraparallel aspects in a way that it shows you the person's life or career. Cafe Astrology tried to interpret the parallels (and contra parallels as well) (http://www.cafeastrology.com/natal/declinationsparallels.html ). Most sites and books say that a parallel is like a conjunction and a contra parallel is like an opposition. Is it? I think that the parallel and contra parallel (not conscious) aspects support the existing most important aspects and placements, for good or bad. And I keep thinking. For example about my own Sun/MC trine Pluto, with Sun parallel Midheaven and both contra parallel Pluto, in combination with Moon contra parallel Uranus. Usually Pluto is considered to be a difficult symbol. But now that we know that icy Pluto has a big heart, could we see Pluto as a courageous, brave and defending symbol too? That is according the sign that Pluto 'rules': Scorpio, a water sign. Pluto has fluid, Pluto has ice, Pluto is warm inside... Maybe after the progressed Mars inconjunct Pluto that is exact in my chart next week, I will let you know...

PLEASE DO THE POLL about declinations (on the right, till August 1)! Thank you in avance!