BIRTH CHART OF MARION JONES
Judge sents her to jail 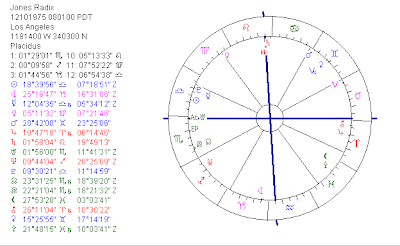 MESSAGE IN MARCH (not knowing the HOB yet)
Marion Jones goes to jail. The judge was very hard on her and gave her the maximum sentence of 6 months. Why? Notice the Saturn square Uranus aspect in her chart. There is only 2 minutes of orb. That aspect is frequent in the charts of those who deal with the theme of limited freedom in their life. There are varioius examples on my blog and site (sarah Jane Moore, the Yahoo case and of course there is Natascha Kampusch, the kidnapped girl in Austria).

Apart from that indication in her birth chart, she has transit Neptune square progressed Sun right now. This kind of transit brings shame and scandall and often isolation. It is also a bad sign for press moments. The public opinion is very hard on her, too.

How did this happen?
Marion Jones was born 12th October 1975 in LA with Sun opposed to Jupiter. This aspect is also there in the charts of Rasmussen and Floyd Landis. It says that they want succeed no matter how, and that it might be a succes with question marks...

Look at Pluto oriental (for a focus on winning) and the prominent, calling Mars (no major aspects in sign)square Aries Point! This chart is telling us that she just had to be an athlete with a (overly) strong drive to win. It is a pity, such a disgrace that happened to a young woman who used to be regarded as the fastest woman in the world.

And PS:
On March 11, the day that she has to surrender to start her time in jail there is transit Uranus inconjunct Sun AND transit Saturn is in a tight sextile with her progressed Uranus (activating the Saturn-Uranus conjunction in her chart). Sextiles and trines...sometimes they make it just easy to go to jail.

UPDATE MAY 9, 2008:
Astrodatabank provided the birth time (8:01 a.m.) and I published my comments there like this:
Marion Jones'chart says: crucial limitations of freedom, an orientation on winning and gain, and a vocation for sports and using energy at any possible level and a need to 'climb' the social ladder (at any level). It is because her birth chart is marked by these 5 items:

1. Sun opposition Jupiter
This is the second tight aspect in her chart. It is the same affliction as in the charts of Floyd Landis and Rasmussen (bikers, who did not exactly follow the rules as well). It says that they want to succeed no matter how, and that it might be a succes with question marks...

2. Saturn square Uranus on the cross of the chart
Saturn square Uranus on the corners of the cross point at the crucial importance of the theme of limited (Saturn) freedom (Uranus) in her chart. Saturn afflicted by Uranus is frequent in the charts of those who deal with the limitations of being free. There are various examples: Sarah Jane Moore, the Yahoo case, and of course there is Natascha Kampusch, the kidnapped girl in Austria.

3. Pluto rising before the Sun
Look at Pluto oriental (for a focus on gain and winning, strategy; not uncommon in the charts of politicians and those who are dealing with money and influence).

5. Unaspected Moon in Capricorn
She has a need to be respected (and that need can be very strong).

(Sun, Moon or planets without major aspects in sign are prominent in charts).

PROGRESSIONS/TRANSITS
I. That Saturn-Uranus square was being activated by transit and progression and indirectly by the solar return chart of 2007.
For example: on March 7, 2008, when Marion Jones went into prison, she had
a. transit Saturn semi square Sun and
b. transit Uranus inconjunct Sun, perfecting in 2 days time,
c. also on that day there was a solar transit sesquisquare both Saturn and Uranus
d. AND transit Saturn was in a tight sextile with her progressed Uranus (sextiles and trines...sometimes they make it so easy... to go to jail)
e. In her solar return chart for 2007 we see Moon conjunct the radix ascendant and Uranus, square Saturn (again: Saturn and Uranus).

II. Saturn-Midheaven is activated as well:
. transit Saturn conjunct progressed MC: the disadvantages of a certain position or condition ....activating the conjunction of Saturn and natal MC! And maybe these transits were referring to the transit of Saturn square her progressed MC when she won her first golden medal in 2000

III Neptune is active
a. Neptune is on the descendant of the solar return
b. transit Neptune square progressed Sun: brings shame and scandall and often isolation or being a suspect. It is also a bad sign for press moments.
And maybe these transits were referring to Neptune conjunct her natal IC, pointing at drugs, fake, secrets and...the first gossips...in 2000.

IV Jupiter
In 2006 the Sun oppositoin Jupiter in her natal was being activated by progressed Sun inconjunct Jupiter (a disbalanced judgement). That was when she was allowed to continue her efforts, though there had been doubts about her test results.

Conclusion: her chart shows her strong ambitious drives and the trend to not stick by the rules. These trends were activated at a certain moment in time.

PS See the update with the chart with hour of birth