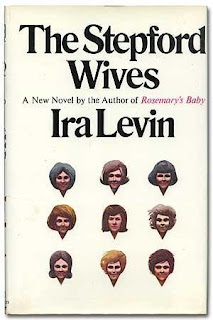 The controversy about the latest book of Mark Driscoll 'inspired' me to write about Venus opposition Saturn (and about Mercury-Uranus). Just like Ted Haggard, Mark Driscoll has a difficult aspect between Venus (in Scorpio) and Saturn. In his latest book Driscoll says that he dreamt about the sins of his wife (before they married) and that he woke up vomiting, sick of it. Really, a lovely description of Venus conjunct Neptune (dream) opposition Saturn. He wants women to be submissive housewives, fulfilling their husbands' wishes. It is almost the Stepford Wives, a book written by Ira Levin (Venus in Cancer inconjunct Saturn on his day of birth, August 27, 1929). Is that just coincidence, I wonder? Do Venus-Saturn men want women to be functional perfect dolls? Maybe a good question for the next poll!:)

With Venus-Saturn people often tend to stay safely married, even if the marriage had better times and even if they think that the partner is not exactly perfect. When there is a hard aspect between Venus and Saturn the wall between two persons grows and grows, but for some - often material or parental - reason is seems harder to be separated. The semi sextile between Venus and Saturn (rising before his sun) in the chart of Seal might have helped to stay in the marriage with Heidi Klung longer, too, for example. Read Astromarkt about Saturn in a long lasting relationship. Saturn is sometimes the glue that keeps a couple together.

Here is the chart of Driscoll's day of birth.

Venus sextile Mars (and Mars conjunct Pluto) symbolize the intense passion and desire (or strong hormonal activitiesJ) that turns any relationship into a challenge, even more with Saturn opposition Venus.


But, can we see the controversy? Yes we can!

Mercury is conjunct Uranus and they rise before his ‘calling’ Sun (Sun without major aspects in sign or orb 5 degrees). He will draw attention at any possible level and is first of all someone with independent and controversial ideas. And what better way to upset an audience than this way?

There is also an astrological reason for being discussed now: his progressed Sun is conjunct natal Neptune and transit Neptune is square his progressed Sun. That might isolate him, he might be seen in a negative light. Or has this already happened? He has been accused of pornofying the church (see this link: http://www.christiannewswire.com/news/56609176.html) and that's not the only blog...

LINKS
Unlike other preacher men there is little Saturnal fatherly or managing tendency.
http://astropost.blogspot.com/2010/12/preachers-charts.html

http://astrology-love-romance.blogspot.com/2010/02/ted-and-gayle-haggard-sharing-venus.html
Evangelical priest Ted and his wife Gayle Haggard divorced after his coming out. I quote:
"There is an inconjunction between his Venus and Saturn. She has Venus trine Saturn. They share Venus-Saturn. That might indicate marriage of convention (for the sake of the children and status) and might be one of the components that keep them married though he is a homosexual.Venus and Saturn may be untrue sometimes, but the combination makes it also hard to separate from each other."

Read about Mercury Uranus by using the labels. Here is an advice about how to deal with Mercury-Uranus (that I should have followed more myself!)


HOW TO AVOID THE BAD SIDES OF MERCURY-URANUS?
With Mercury-Uranus what you say or think may be wrong, shocking, crazy or a provocation (in the eyes of others). Sometimes Mercury-Uranus is the aspect of the eye-opener and a few times the expressed ideas are simply bright. (But that is an exception!:) In an oppressive society, having a Mercury-Uranus in the chart is a burden. People with this aspect often have to learn (Mercury) to change their mind quickly, depending on the receiver of the message. Or they have to learn that you can't just interrupt a discussion or a speaker.

Mercury-Uranus can be manifested in the small circle of home, where the Mercury-Uranus person always feels the need to see the other side of what the rest considers to be the truth and/or provokes discussions about those differences of opinion. Mercury-Uranus in science: you come up with ideas untimely, before the time is 'ripe'. Mercury-Uranus works when you interrupt discussions or the flow of a conversation. Mercury-Uranus just can't wait to hear a (long) answer...Another possible problem is that you are disturbing others with talking...

Advice: take a notebook and pencil with you (write it down instead of speaking). And think twice before publishing your ideas, especially when you are afraid for what others might think of you. Or simply count to 10 and ask yourself if you need to say what you think now, to this person. Unless you want to rebel and be discussed, of course.

BTW  A lot of  astrologers have a Mercury-Uranus aspect and a lot of them heard shocking opinions about astrologers:)...