Ted Bundy was born on November 24, 1946, just like Penelope Jones Halsall, a romantic novelist (passed away December 31, 2011). Ted Bundy became a notorious serial killer. Here is some information about the chart of Bundy and about the astrological situation on the day that he died. I'm not presenting a complete reading here. I just want to show you some of the keys to what happened.

Many others born on November 24, 1946 were decent, nice folks. The combination of circumstances, education, genes (!) and the hour of birth made the difference. Those born in the afternoon and evening of November 24, 1946, all have the Sun 'calling'. It means that they or their life styles will draw attention at any possible level, somehow, maybe as a star, or as a leader. Ted Bundy drew our attention by killing and by being executed.


Maybe the importance of the theme of death (Mars-Saturn) rises because of Ascendant sesquisquare Mars/Saturn (meaning the frustrating dead end on the horizon). He had the strength (Mars trine Pluto) and the energy (5 placements in fire signs) to do it and the desire for excitement (and falling in love again and again). He also wasn't afraid of 'discord' (Venus sesquisquare Eris).

Women, love and desire had a key position in his chart (AC/MC-Venus). It is strange to find Ascendant/Midheaven opposition Venus here, but it is true: women were of crucial importance. 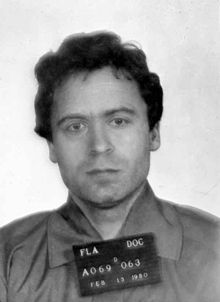 He managed to look like a nice guy. The combination of Moon, Venus and Neptune is the combination of artistic talent. All three were in aspect with the Ascendant. His appearance and behaviour was a 'work of art'. He acted. Women thought that he was polite and when he asked them to help him get some books into his van, they were willing to help him.

SUN SEPTILE NEPTUNE RULER 8 (inspired by fantasy of death)
There is a minor, hidden aspect that tells us more about that acting and about what was hiding: Sun ruler 1 septile Neptune ruler 8. Can I read this like : he was inspired (septile) by acts (1) of life and death (8)?

SUN/MOON square SATURN/NEPTUNE (motivated by/used to sadness and sickness)
As Ted Bundy is not an ordinary person, his chart can't be read as that of normal persons. Sun/Moon (249,98) square Saturn/Neptune (159,5) sounds like being motivated by sickness and sadness. It might be 'part of the picture'. Sadness and sickness might always have been part of his life experiences, too.

When he committed the first of the eerie of rapes and murders, transit Saturn was opposition his Progressed Sun and the progressed Sun was moving to Capricorn. He ended a period in life.


When his life on earth ended, there were more than 10 transits and progressions at the same time. When there is a very important period, there are almost always many indications.

There were two exact aspects:

Here is the picture of the chart:

More about Ted Bundy on Wikipedia

Your interpretation of Ted Bundys chart was a bit like not seeing the forest for the trees. You aren't a Gemini or Virgo are you? That is; you focus a lot on minor aspects and details while not mentioning the major aspects that glaringly stand out. One of the many elephants in the room are: If you look at the overall chart pattern which is a 'bowl pattern' and then you look at the 'void area' of the chart (the empty half where there are no planets, what do you find? That's right the 8th house of sex & death. Indicating either a conscious fascination with sex & death or unconsciously being compelled to explore sex, death and dying to the point of obsessiveness. Because Ted has Saturn conjunct Pluto in the 12th house both retrograde (the house of the unconscious) there's a strong indication of being unconsciously driven by death and transformation of form & in this case from the living to dying! Also the Sun, Moon, Mars, Mercury & Venus are in the 4th house which is an 'unconscious house' as well and Jupiter close enough to the 4th to be included, which leaves only three planets; Charon, Neptune and Uranus in an area of his chart which are conscious. In other words the unfortunate fellow was hardly aware of himself enough to probably know why he did anything at all. On thing he would be aware of however the Uranus on the 11th opposite Moon/Mars on the 5th indicates a very conscious need for danger, risk, expressing anger & excitement. These things he'd be very aware of because Uranus is the lead planet on the bowl pattern making it a prominent influence over him. This I feel makes his ability to make himself look nice and his in-conjuncts, semi-squares, etc. pale by comparison.