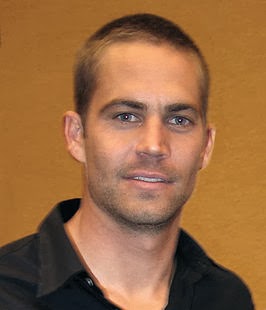 The tragic death of Paul Walker reminds me of James Dean and the fiery car accidents (Michael Hastings and Dick van Dyke) earlier this year, but most of all of Mars-Uranus. Paul Walker, sadly enough, is another example of what Mars-Uranus can mean if the aspect is mean.

On the day that he was born, Mars and Uranus didn't make a Ptolemaic aspect in sign or orb 5 degrees. Mars and Uranus were important in his chart. They were sort of 'calling' him to be as fast and furious as he could be. In the progressed chart the Sun was between an opposition with Mars and a conjunction with Uranus. At the day of the accident we see transit Uranus semi sextile Mars. He was an actor. With Sun in a 75 degree minor aspect with Neptune there is always the chance or risk to identify yourself with the part that you play in a movie or in a political theatre.
There is no hour of birth, so there is little more to say except that there was a Mars-Jupiter conflict and the progressed Sun was changing sign and maybe I could add some more, but in my eyes most important is that when you have an important Mars-Uranus aspect, or when Mars and Uranus are both important in your chart, you should perhaps better avoid to drive fast on a transit Mars-Uranus day. I know that it is not easy to avoid aspects (I even planned a renovation and redecoration of the house during Venus retrograde, as a sort of a test person:). And maybe it is even impossible to do.

It takes more than one aspect and one transit for a young person to die this way. Without hour of birth we'll never know what they were.

Here above is the chart of his day of birth with transits and progresssions (click to get larger picture). I like to add that his Libra Venus trine Saturn and Mars in Taurus attributed to his good looks (see http://astropost.blogspot.nl/2008/09/male-attraction-venus-saturn-taurus-and.html ). He was a model and an actor.

PS the latest news: a mechanical defect could be the cause of the accident with the Porsche. The excellent driver couldn't avoid it as there was a fuel disorder.