The damper in the chart 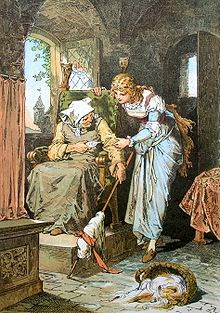 This post is about  growing tight hard **) Venus-Saturn or Jupiter-Saturn aspects. They often promise dampers. Let me explain...

Picture your progressed Sun trine Jupiter, followed by a square with Saturn a few weeks or months later. It doesn't undo the prosperity and positivism of Jupiter, perhaps (though it  cAn), but it certainly makes you aware of the nasty sides of life soon enough, so that the period of optimism won't last for long.
Or what if progressed or SA Venus hits your Jupiter, immediately followed by a bump with Saturn? Ohw!&@&€! It is like the wicked fairy on the Sleeping Beauty's birthday party.

But, could you see this inevitable follow-up in another light? Aren't those people with tight Venus-Saturn or Jupiter-Saturn afflictions already used to expect something nasty, always?
First there was the day that you were born with a tight hard aspect between Venus or Jupiter with Saturn. Venus-Saturn restricts the way that you sympathize or enjoy things. You might be just too serious, materialistic or afraid to simply enjoy, love or admire. Maybe when you were a baby, you felt alone and cold or something hindered you in your most intimate and happy moments, who knows. We can't know for sure, but with Venus-Saturn or Jupiter-Saturn your chart tells you to be cautious and wait for more stabile and sure moments to arrive and not to have too much fun. Jupiter-Saturn is like a journey with too many stop overs and too much administration. You are just too cautious, scared or ambitious/materialistic to really go for it. The sleeping beauty waited 100 years for Mr. Right to kiss her, involuntarily and without knowing it, not growing older at all, but still: she had to bide her time.
Physical problems, matters of time and age, your status or parents or your position in society might block the easy flow of the planets Venus or Jupiter and when you come of age you might experience the benefits of Venus-Saturn or Jupiter-Saturn. That leaves little time to enjoy it.

Dampers happen mostly always with such aspects. So it is not surprising that when your progressed Venus meets Jupiter or vice versa, you don't trust it. You dare not jump into the pool of fun, hesitate to sign the papers before consulting an expert, take care not to get hurt too much...

But, still, there is that party, there is the success and there is the joy of that moment and you - somewhat - like it (you just have to agree with that:). The follow-up (the damper) doesn't come unexpected. So you don't even cry. It will be just another confirmation of what you thought it would be like.
(And then they say that it is YOU who causes it, because YOU were not positive enough. Funny, really.)

I think that life is more fun with separating almost exact narrow aspects of Venus or Jupiter with Saturn... Even the wider growing hard aspects don't 'sound' as 'happy go lucky'. Jacqueline Bouvier (who married Kennedy and Onassis) had Venus in a growing opposition with Saturn.

More examples?
Bashar al-Assad (the Syrian leader) has Venus sesquisquare Saturn, applying. In 2004 his progressed Sun reached Venus, but the meetings with the Israeli leaders didn't lead to peace after all. He started good, but it did't last.

Bob Geldof has Jupiter Retrograde in the natal chart. The progressed planet met natal Saturn in the early 70's. His progressed Jupiter changed direction in 2007. In 2006 and 2008 he was nominated for the Nobel Prize. Those years happened to be the years of controversy (see Wikipedia), too...

Sixto Rodriguez has Jupiter tightly semi sextile Saturn, applying. He didn't benefit much of his successes in South Africa, and had 'late success' indeed, but..., well, read the post about it.
Funny how Geldof and Rodriguez both dealt with the disadvantages of 'the international' Jupiter. Geldof because he couldn't become SIR. Rodriguez because he never heard of his success, being in the States.

Steven Hawking has a tight applying square between Venus and Saturn.

Susan Boyle has a separating tight square between Venus (retrograde) and Saturn. In the progressed chart there is 15 degrees orb now...

Dutch terrorist Tanja Nijmeijer has a tight and applying Jupiter sextile Saturn. The sextile perfected in progression when she was about 14 years old. That is when she dreamt of becoming a religous sister. (Interesting, because Jupiter-Saturn is one of the symbols of a religious profession). From that moment on, Saturn came first and Jupiter later. Though the publishing of her diary was seen as the prelude to her execution, instead she became a top member of the FARC.

SEXTILES, QUINTILES AND TRINES
Natal symbols of easy ways (out) and creative cooperation have a different effect. Here are some examples of them:

1. Monika Lewinsky's tight Venus sextile Saturn hasn't brought her much luck or fun up to now. The sextile is applying. In 2002 her progressed Sun was first conjunct Venus and later sextile Saturn. That is when she showed up on TV telling her story and got a contract for (first successful and later failed) TV shows.
! I noticed Venus-Saturn progressed aspects in the chart of Michael Jackson (Venus trine Saturn in the natal chart) in the years that he went into business (buying rights of songs).


2. Malala was born with Jupiter Retrograde. The progressed Jupiter is now at 19Aqu14 (still retrograding) and Saturn remains in the 21st degree of Aries. The natal sextile brings her an opposition with Jupiter and than a trine with Saturn in the 2030's, and that sounds good. Saturn's trines bring at least respect. Jupiter sextile Saturn helps her to find ways out of restrictions.

3. Pope Francisco has a natal quintile between Jupiter and Saturn, applying. The quintile indicates a creative way to join the planets. He ended (Saturn) with success (Jupiter). He is creative in finding a way to see the positive sides of duty and set backs.

4. Tina Turner's Venus trine Saturn is tight and applying and that worked for her!:) A professional and respected artist who loves her work and married late:)..

5. Susan Boyle has a separating tight square between Venus (retrograde) and Saturn. In the progressed chart there is 15 degrees orb now...

I wonder: do you have a damper in your chart? And how do you deal with it?

*) A retrograde planet in your natal chart or by transit might first meet Saturn in the Venus-Saturn or Jupiter-Saturn aspect and make an aspect with Venus or Jupiter later. The progressed retrograding planet has a long lasting effect. The transit will eventually turn and start the 'damper-procedure' as always...

I have Jupiter square Saturn applying to opposition and Venus semi-sextile separating from opposition. And yes I experience them in the manner you have described. I try to learn from each experience, use that wisdom and knowledge gained to make lemonade from the lemons. Its not easy though but what else can I do but soldier on.

Venus is semi-sextile Saturn. Venus is trine Jupiter,separating from opposition, so I guess that's how the lemonade gets made. :-)