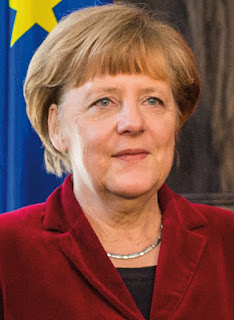 On November 9, 2015 Uranus was novile Neptune. It means that Uranus and Neptune are 40  degrees apart. A novile is the kind of aspect for rejoice. In an earlier post (February 2014) I wrote about Uranus-Neptune and one of the meanings of the combination: assimilation (think of the Borg:). Perhaps this a day to be happy with assimilation, media hypes and a hoax. The novile of Uranus-Neptune makes it easy to be awake sleepy or vice versa. Uranus-Neptune is about unverified news.

There was a Uranus-Neptune conjunction when the first humanoid robot was constructed by Honda in 1993. That happens to be the same year of the Treaty of Maastricht (the foundation of Europe as it is now). The idea was the assimilation of nations in the long term. Uranus conjunct Neptune showed it.

One of the most important persons in Europe today, is Angela Merkel. Just like Barack Obama she has Sun square Neptune in her natal chart. Both Merkel and Obama have an aspect between Uranus and Neptune.Angela Merkel's chart has Uranus square Neptune. Barack Obama's chart has Uranus quintile Neptune. The square signals a struggle, the quintile signals a creative way to deal with the issue. Midpoint Uranus/Neptune is semi square Ascendant in Obama's chart and semi square Angela Merkel's natal Sun. They are both important Western leaders. Both have the aspect of assimilation.

Uranus and Neptune move slowly. The planets need to have a special place in the chart to be important for a person. In Angela Merkel's chart Uranus rises just before the Sun and Neptune is conjunct Midheaven. In Europe's (Treaty of Maastricht) and Barack Obama's chart Uranus and Neptune are in a less important position. Angela Merkel's life changed because of the assimilation of Western- and Eastern Germany. Now she is very much in favor of a united and growing Europe.

The combination of Sun with Uranus and Neptune could make a person hyper sensitive or involve the person in a media hype, according to the books (f.ex. Ebertin). I have seen examples of that. Both Derek Ogilvie (a television medium) and Sacha Baron Cohen have this midpoint combination. At a certain point in their lives, they were involved in media hypes.
Angela Merkel's is Sun/Uranus square Neptune. Reinhold Ebertin says of this combination that it warns for detrimental blind zeal. Well, it took her a long way up:). She is an idol now. Many immigrants call her 'Mother Merkel'. But just like Barack Obama, Derek Ogilvie and Sacha Baron Cohen she is a controversial idol. That is even more so, today, now that she sort of invited the refugees of the world to unite and come to Germany, thus creating a chaos and a possible danger for Europe's stability. There is also the danger of terrorism committed by Syrians. In Paris, they found a Syrian passport on one of the terrorists.
The Uranus-Neptune conjunction of Europe collides with the Uranus-Neptune square of Angela Merkel.

The progressed Sun of Angela Merkel is in a quindecile aspect with both transit Neptune and natal Eris. There will be a strong focus on uncertain issues and discord. It must be rather frustrating, even though the sextile of progressed Sun and Uranus is not long ago. She will have to wait till August 2016 for transit Jupiter conjunct progressed Sun to give her vital support. Meanwhile, her charts cries change.

Here is her chart with transits and progressions for November 13 (attack in Paris) with Saturn square her progressed Ascendant and Midheaven inconjunct Moon in the progressed chart, indications of emotions and a possible hard confrontation or serious prospect. Meanwhile Poland refuses immigrants after November 13... And it seems to be the end of Schenger and back to borders in the EU.