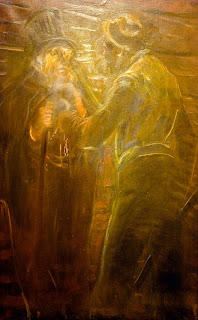 Last night someone I know heard a scream, saw a man lying on the ground in her street and ran down the stairs in a hurry. That was a. because she is a nurse and wanted to help; b. because she is a Moon Aries square Mars and needed to do something about it:). She looked at the man and noticed that he was bleeding but before she could have a better look, the police already arrived. Then she heard that the man had been robbed when he delivered food. He had been shot in the chest for a bit of money! Here is the story in Dutch (maybe you can translate it but pictures speak for themselves). The (probable) shooter was arrested.

What does a chart say when someone is suddenly confronted with a crime scene right in front of the house? A lot! The incident was nasty but she did the best she could. That is satisfying and that is also being reflected by transits and progressions of Saturn, Pluto, Node, Chiron and Jupiter. There is a full list for those who continue. But I am particularly interested in transit Saturn opposition Chiron, because this transit is 'generational' (shared by a large number of people) and yet descriptive for the situation: the disadvantages (Saturn) of curing and healing (Chiron) others (opposition). Generational transits have a personal effect when one of the two positions involved are of importance in the natal (or progressed) chart. Well, Chiron is prominent in her chart as he rises right before her natal Sun and  Chiron is exactly trine her Midheaven. Perhaps that is the key to her professional activities!

Here is the list of transits and progressions with an orb of less than 0,5 degree.

Even though she wasn’t hit by a bullet and even though she didn’t know the victim, she was down (transit Saturn), but feeling OK because she tried to help.