Jupiter when you die 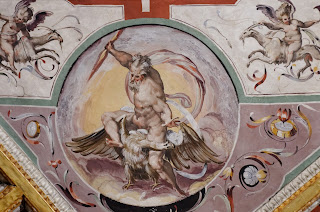 If a chart, calculated for a time of birth, would give us the time of death, precisely, we wouldn't be happy but scared.  We are lucky that there aren't such charts. Being born on the same day, place and hour doesn't mean you will die on the same day (see that post: http://astropost.blogspot.nl/2013/02/born-same-day-die-another-day-time-twins.html on time twins).

Charts can be read only in the context of culture, gender, genes, age and condition/situation. Changing the context helps a lot when a chart receives hard transits. That's, by the way,  an encouragement to make the world a better place and to try to have some peace.*)

We expect hard and nasty aspects for a day of death, but the truth is, that there is often a transit of Venus (to make things easier) or Jupiter (to improve a situation). When people say 'it was better for him (or her)…' there is often a Jupiter transit. Jupiter helps. Jupiter is the symbol of the doctor. But Jupiter is also the symbol of a passage, a voyage, moving on…

Yesterday Prince Friso, King Willem Alexander's brother died, age 44, while transit Jupiter was trine his natal Moon (11th Scorpio) and in the 8th progressed house (where the progressed Moon was, too). Jupiter trine Moon is one of the best aspects a person can get. And sometimes Jupiter simply accompanies death. Prince Friso was in coma for 1,5 years following a ski accident.

Here is the progressed (!) chart of Prince Friso, with transits and progression of yesterday.
*) See about Sun-Saturn square in time of war: http://astropost.blogspot.nl/2009/05/transit-saturn-square-sun-during-war.html

LINKS
I like to see Jupiter in the charts of moments of death as the symbol of the assistance (comfort, guiding) of those around and as the symbol of passing away/on.  There are several posts on this subject (http://astropost.blogspot.nl/search/label/Jupiter.%20Life%20and%20death)

In 'The reflection of difficulties' you read about the transits and progressions with the chart of Princess Mabel, now Prince Friso's widow: http://astropost.blogspot.nl/2012/02/reflection-of-difficulties.html
Her birthday was on August 11, one day before her husband died. Her solar return chart has Neptune on the Ascendant and this Neptune is inconjunct ruler 7. This goes together, among other indications, with Progressed Mars inconjunct natal Moon and Progressed Moon + P Ceres square Sun.