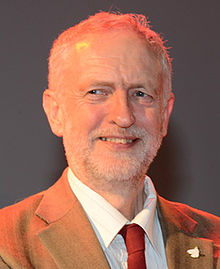 Jeremy Corbyn is the new leader of Labour and he is an old style socialist, grown in the belly of the unions. There are plenty of messages on the internet about his sympathies and opinions. He has strong friends and ditto enemies in his own party, so he is a controversial persion. How nice would it be, for the astrologer, if he had a Sun-Uranus aspect…but he has not. What he does have, is a Uranus semi square Pluto aspect that is likely to have been activated in the past 4 years of Uranus square Pluto (see this link: http://astropost.blogspot.nl/2013/08/resonance-of-uranus-pluto-and-jupiter.html )
It is rebel time! Time for the rebels!

The chart of the day of birth of Jeremy Corbyn is not so extraordinary. What is missing in the chart, are placements in water signs. There are a lot of placements in air signs (Gemini, Virgo, Aquarius).That is an important characteristic. In my article about not aspected planets, and missing placements in elements (http://www.astromarkt.net/astrology_to_study-html/unaspected-planets-and-missing-elements-html/ ) you may read this about having no planets in water signs (Cancer, Scorpio or Pisces):

No water:This calls for looking for emotions and the feeling to ‘belong’. This person is sometimes sentimental, other times without much empathy.

There isn’t much ‘control’ of sentiments. He is ‘all air’, talkative, communicative and reasoning. That is what he does best.

As his hour of birth is a big question mark, I can’t see if the Moon or Mars is the first to rise before the Sun on the day of his birth. The Moon would indicate involvement, the party-member. Mars would be for the activist. And the conjunction rising before the Sun would make him long for action.

Now we have a communicative person with a desire to ‘belong’ to a family or party somehow, anyhow, and with a need for action. The Moon in Taurus explains the Marxism (Taurus focuses on material things), the Gemini Sun makes him communicate about it.

BORN SAME DAY AS...
Now Jeremy Corbyn has an astro-Twin,  Scottish Mrs McGuire, also Labour party member, born on the same day and in the same year. She wanted to be able to speak freely on the subject of disabilities. Unlike Mr. Corbyn, she is an extreme loyalist (!). So what position in the natal chart could show the tendency to vote against the party’s wishes? Uranus (controversy) or Eris (discord) must be important.

CONTROVERSY
As he is a controversial person, elected on a ‘Sun inconjunct Uranus-day’ (a day with a enormous surprise) and because Uranus doesn’t make any aspects with Sun, Moon, Mercury, Venus or Mars (surprisingly) I suppose that Uranus has a corner position in the chart (either on the horizon or on the meridian). And the party communicator…the journalist, too, are in the chart, but where is the leader in the chart?

TIME OF BIRTH?
Warning: what follows is all speculation!

A birth time of 23 hours would place the Sun in the 5th house (for leadership) and bring Uranus on the Descendant, in the 7th house, still in Gemini in the final degree*). Meanwhile, the Sun/Moon midpoint is semi square Saturn, to illustrate ambition and the motivation to be a manager. This also motivates him to be careful with other people's money (Saturn in 8). But OK, his real time of birth is unknown...

- transit Jupiter would be trine progressed Midheaven (a key indication for success) with
- the progressed Moon on natal MC,
- Moon-MC quindecile transit Uranus for the emotional excitement because of an unbalancing surprise.

Let me give it a try for the exact (or almost exact) aspects for that day, without time of birth…

Doesn’t sound like a victory at all… except for the Venus-Jupiter joy (and he married in 2015). It takes a time of birth to see if the Moon, MC and Ascendant mirror yesterday's election.

GENERAL ELECTION 2020
On the day of the next General Election in 2020, May 7… does his chart show a winner?

Jupiter will be quindecile the progressed Sun (strong focus or obsession with success) before May 7, while transit Pholus inconjunct the Sun seems to indicate that he shot his own foot (a turning point in life with a loss involved – maybe just lost life style). That doesn’t offer much insight, does it?

But Transit Jupiter would be square Ascendant, inconjunct natal descendant, however, if he was born at 11 pm. Maybe because he didn’t win, maybe because that is when the progressed Sun conjunct natal Pluto makes him face problems. His life style will change due to politics and stress

Perhaps it helps you to know that while the natal Moon is in bounds (20th degree) his Progressed Moon is Out of Bounds and on top level in 2020, but about to decline and going down in May. His best years are coming, still. But they will be over in/after 2020.

Predicting is difficult, especially when it is about the futureJ. But Saturn inconjunct MC is pretty bad in election time. However, times are changing all the time. Maybe in 2020 both mr. Corbyn and mr. Cameron have left the stages for other reasons.

*) Gemini is a double bodied sign and on the 7th house cusp this sign might signal more than 1 marriage. Uranus is a disruptive symbol that doesn't stand for continuity in the house of relationships. He married 3 times, and 2 times with someone not born in the UK.

You mention J. Corbyn does not have many strong Uranus connections, like a Sun-Uranus.

Well, usually I check the Draconic chart if something appears to be "missing".

There's the Uranus connection! To be some sort of revolutionary, to be a rebel of some kind, is what his soul (Draconic) has intended for him! :D