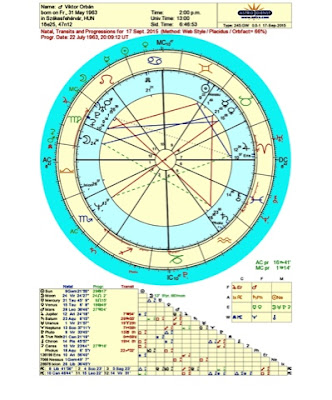 Astrothème provides this chart of Hungary's PM Viktor Orbán, PM of Hungary, for 14.00 hours on May 31, 1963. Here you his chart with transits and progressions. They are not easy.

1. The progressed Midheaven conjunct natal Uranus nicely mirrors that there is controversy around him. People are fore or against him. And there is a hectic, unexpected situation (Uranus!)
2. With Transit Saturn trine Progressed Sun there is also stability now, continuity and self respect. This won't last for long. Saturn moves, like the refugees do.
3. Transit Saturn will be square his MC soon, if Astrothème is right about his hour of birth.  Transits of Saturn are hard.

Doesn't this show his present position?
Some consider him as the goal-keeper of Europe. Others see him as a rebel against Europe, modern democracy and Merkel's policy. They picture him like a modern Hitler and then his fans come to show their support. But in these hectic times one thing is certain: there is criticism. And that is so Saturn, just like blockades, borders and restrictions. The combination of Uranus and Saturn issues the theme of breaking free (or not).

Remember:
Charts don't tell us what will happen. The symbols are flexible. All depends on gender, genes, social and economic or political circumstances...Orbán's Sun and Moon are in flexible signs. Borders sometimes are and sometimes not...

You can see all of what is going on in that chart. For a view on Orbán, today, see: http://www.cbc.ca/news/world/hungary-s-viktor-orban-the-cunning-leader-who-would-keep-refugees-out-of-europe-1.3230749 and think of transit Saturn (criticism all around). 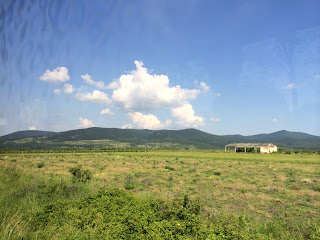 PS MIGRATION
Neptune was in Pisces in the days of the Migration (4th century) and in days of revolution. Uranus-Pluto stresses nations and creates a lot of unrest throughout the ages. Two important factors contributed to the present situation and it will not end untill Saturn is conjunct Uranus (a new order). The chart of Europe and Hungary will show what's next.

Quoting myself:
In 376 the Migration Period (see Wikipedia) began that ended the Roman Empire and was the start of the Early Middle Ages. From February 375 till March 379 Neptune was in the first degrees of Pisces. Neptune in Pisces mirrored a period of ideological wars and revolutionary changes. The Migration Period lasted for ages, but started then, with Neptune in early Pisces.

LINKS
http://www.astromarkt.net/astrology_to_study-html/neptune-in-pisces-html/ About Neptune in Pisces in history

http://astropost.blogspot.nl/2014/05/bright-sides-of-bad-transitsprogression_28.html The bright sides of transit Saturn (a bit cynical:)