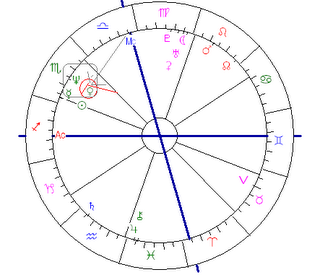 With transit Saturn inconjunct her progressed Ascendant, on the way up to a 150 degree inconjunct with natal MC...and Progresses Moon inconjunct Venus, Jody Foster ended her relationship with Cydney Bernard, after 14 years.

COMING OUT
She recently told the public about the fact that her partner is a woman. That was in December 2007, with transit Neptune square her progressed MC and Neptune on the lowest spot of the solar return chart. Neptune is the oriental planet in Jody's birth chart, conjunct Venus. This screems 'art'! And maybe also 'secret romantic affairs'...? Also notice that in her progressed chart Venus and Neptune are on both sides of the Midheaven. And right now, now that the secret was revealed, the relationship apparently crashed!