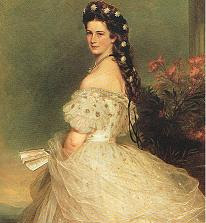 The life of Empress Elisabeth (‘Sissi’) of Austria is food for imagination. That is why she is the main character in operettas, musicals and movies.
As a 16 year old (!) Duchess of Bayern she married the Austrian Emperor Franz Josef. She got 4 children. One of them, Rudolf, later committed suicide. Elisabeth was cheated by her husband and could hardly stand up against her severe mother in law, Sophia. She travelled through Europe in order to escape the rigid court protocol. But she had to take her psychological problems with her. She had anorexia and took unnecessary risks that gave the idea that she wanted to get killed. Eventually, she was murdered. An Italian anarchist stabbed her in her heart close to Hotel Beau Rivage near Geneva on September 10, 1898.
How does that dramatic life show up in the chart of Elisabeth? 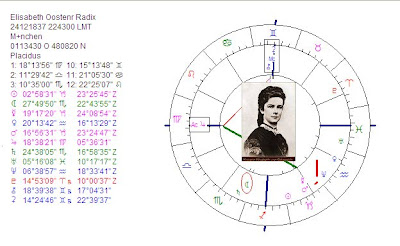 The symbol van nutrition and heirdoom is Ceres. Ceres is on her Midheaven. The Moon in Scorpio – restricted by Saturn – rises before her Sun. Jupiter is conjunct the Ascendant. If you want to know what that means, read on.

The Astrological I.D. of Sissi is marked by:

1. Ceres, planet of genes, DNA, nutrition and production of heirs. It was her main destiny to see to it that a new emperor to be should be born. Tragically, the only son she had killed himself. One of the meanings of Ceres is ‘diet’. Sissi had a very strict diet (anorexia).

2. The oriental Moon (= the Moon rising before the Sun) is another symbol of what a woman is. It is not easy to have the Moon in Scorpio if you are subjected to the role of ‘somebody’s wife’.

3. Jupiter is exactly on the Ascendant. Jupiter symbolizes the international, the traveler. And Sissi was traveling. She crossed Europe, she married and moved to another country and she died abroad. Traveling and foreign countries were crucial in her life.

4. Chiron is conjunct Midheaven. Bob Marks sees this placement of Chiron as fear for failure. Such a fear can in an extreme way lead to an excessive urge to ‘achieve’ or the other way: to run from responsibilities. And that is what Sissi did. She traveled to run from her the obligations of her status.

I.D.: the symbols of motherhood are angular in her chart and crucial in her life. The other item is traveling (angular Jupiter).

5. Not directly visible in the chart drawing is the fact that Neptune does not make Ptolemaic aspects in sign or orb 5 degrees. Neptune is the symbol of movies, fantasy, romance, ideals, beliefs and of discretion. This planet is biquintile Saturn and quintile Node, shaping a golden yod that can mean illnesses in the family. Depression was common in her family.
The prominent Neptune is in the fifth house of children.

CHARACTER
Eventually Elisabeth started to resist against the draconic methods of education that her mother in law had in mind for her children. But in her own chart you see the same sort of rigid tendencies. And so it is in hre life, dieting, and even doing sports (very strange in those days) in order to remain young forever (Virgo Ascendant likes everything to remain young and new)
Sun is in Capricorn, Moon in Scorpio and Ascendant in Virgo for being severe. With Venus square Saturn she did not value herself much. Her husbands cheating on her did not contribute to that. She used to hide her aging face behind scarfs and voiles. Another example of her stubborn rigid ideas is that she kept insisting to speak Greek with a not Greek speaking Greek princess of German origin. Yes, Sissi knew how to speak Greek. She had Mercury trine Jupiter.

The Moon conjunct Saturn is the ideal aspect to keep punishing yourself with unpleasant memories. It is also an aspect for the restricted mother. Elisabeth was not allowed to educate her own children. Only in 1865 when the progressed Sun changed sign to Aquarius, she resisted with the help of her husband and won the battle with Sophia.

Sissi doesn’t seem to be a chearful and happy person, but..Jupiter on the ASC helped her to be open minded and to seek for a way out.

MARRIAGE
On April 24, 1854, when she married and her life changed completely , the signs on the progressieve angels of the chart changed.
In her solar reutrn Venus is on the DESC and on either side of the MC you see Uranus and Pluto: a revolutionary change.
.
On her wedding day Venus – planet of love and marriage – was oppositon her Ascendant and Jupiter (indication for a big party). Transit Neptune was square Midheaven and that tells us that her position did not get better by marrying the Emperor.

DEATH OF RUDOLF
Son Rudolf killed himself together with his lover Maria Vetsera on January 30, 1889 . Transit Saturn, dispositor of the 5th house of children, was inconjunct her Mars, ruler 8 (house of life and death). The inconjunction illustrates a lost. And there was Mars (ruler 8) square MC.

DEATH
One month before the progressive conjunction of Sun and Mars, Elisabeth was stabbed to death. There are indications in the solar return for that year. Positions are the other way around as on her day of birth. Jupiter on Descendant (see Jupiter on ASC at birth) and Ceres on the IC (at birth on the MC). Maybe also Pluto in the 8th house is a clue for the way she died. Note that the vocational routing ends in Saturn-Pluto-Mars and that this combination is often reflecting unnatural death causes. It is an important clue in the chart of Romy Schneider, the movie star in the role of Sisi. 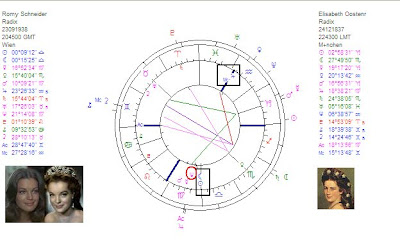 ROMY SCHNEIDER
Romy Schneider ‘was’ Sisi in a range of movies. Her Midheaven is square the Moon of Sisi of Austria, thus linking her works – MC- to the personality of Sisi. Tragically also Romy Schneider lost a child and never got over it.

Neptune is the oriental planet in her chart and Jupiter is angular on the MC. The combination of Jupiter and Neptune prominent in a chart is typical for people with a believing audience, like in the case of movie stars (the audience has to use a lot of imagination).

Venus sesquisquare Zero Aries shows the importance of beauty and arts in her life. Also Sun and Moon are related to Zero Aries. Her most important role remains the role of a woman in a so called ‘fairy tale marriage) (Venus with Jupiter and Neptune), but in her personal life she was not happily married. She divorce 3 times. In 1981 she divorced and her son died with progressed Sun inconjunct progressed Saturn and progressed MC conjunct Saturn). She killed herself on May 29, 1982 with Solar Arc Mars sesquisquare Saturn/Pluto. And in the solar return chart Pluto was on the ASC. The same dangerous combination can be found in her natal chart.
Sun, Moon and Mars are related (in the 22.5 degree range) with Saturn/Pluto. Sun is sextile Pluto and quindecile Saturn. Mars is biquintile Saturn.

BTW:
You can be Sissi if you like in Austria http://www.luxuryalliance.at/