Chart of Oscar Pistorius and the Valentine drama 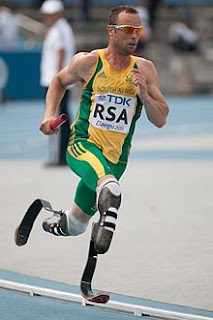 The tragic Valentine story of Oscar Pistorius, the Blade Runner, killing his friend is food for astrological study about


OSCAR
Oscar Pistorius killed his friend Reeve Steenkamp on Valentine's day. Astrotheme published a chart with an hour of birth of 10:30 a.m. that you see here with transits and progressions.

Pistorius has a natal chart with an abundance of placements in fixed signs (7 out of the 10 from Sun - Pluto). If he is born at 10:30 a.m. the Sun is in Scorpio, the Moon is in Leo and the Ascendant is in Aquarius, square Pholus (the symbol of the turning point on the axis of relationships). Fixed signs give a strong will and endurance, they will never give up. With Pluto on Midheaven objectives in life were strongly and fanatically pursued.*)

It is the chart of a determined person. That was how he became a champion, handicap or no handicap. Winning (Pluto) is a top priority when Pluto is on top of a chart.

URANUS AND PLUTO
Uranus makes no major aspects and is 'calling'. Uranus and Pluto are both prominent and the combination of those two often pops up in case of arrest and dramatic change. Midpoint Uranus/Pluto is conjunct his Sun. In my book 'Astro Trio' I refer to that combination as:

Being radical and impulsive. Needs strong nerves to be able to cope with change and tension. Wants to force change. Possible arrests.(for example: David Koresh has Sun conjunct Uranus/Pluto, too).


The chart has the picture of a very determined but impulsive person with a strong character.

VICTIM
The victim, Reeve Steenkamp, was born on August 19, 1983 with her Sun in the middle of his Sun and Mars. Her Mars is rising before her Sun and spot on his Moon. This fires desires and might produce domestic quarrels. Venus sextile Venus is good for a shared taste and preference. They liked and maybe even loved each other.
She had transit Pluto sesquisquare natal Sun. One of the ways to see this transit is ... as an indication for life in danger (and/or being stressed, under pressure).

INTERACTION
Her natal Neptune is conjunct his progressed Sun. That Sun-Neptune combination is very romantic, confusing and deceptive to start a romance with.


Mars-Uranus: new experiences in work activities, sport or sex. Male friendships like was the case with the martyrs in Algeria (read that article), who also shared a horrible incident that ended their life. Johann Calvin and his opponent Michael Servetus shared a Mars-Uranus aspect. Servetus (Mars inconjunct Uranus) was killed, Calvin was responsible. They had a controversy.

Short fuse is one of the ways to read Mars-Uranus. Another quote:
So if you have Mars-Uranus highlighted in your chart: take care, try to be more patient and don't hurry (or worry). This Mars-Uranus connection also appears in the charts of people active in a sport that acquires the capability of acceleration (like bikers and in motor sports).

He was/is fast with the help of techniques and he has a Mars-Uranus minor aspect, perfect for 'acting' artificially. She had the Mars trine Uranus to be attracted to fast and unique men.

VALENTINE
But then came the changes, the fame and the other way of living, all reason enough for tension and stress. The minor aspect between Mars and Uranus (a 67.5 = half sesquisquare aspect) showed itself. Mars-Uranus has a temper. And transit Pholus joined Uranus on the fatal day, turning his world upside down.

On February 14, 2013 transit Saturn was semi square Progressed Sun (a bad omen: frustrating setback, the end of a period of life) and almost square the Ascendant (hard relationships) of the 10:30 am chart, while the Progressed IC was inconjunct natal Neptune (a deplorable state with a loss involved). Also Progressed Moon was inconjunct Uranus, describing a memorable shock or incident with a loss involved. (Consider that those transits are only correct if the time of birth is correct!) This seems to describe how he feels now.

PHOLUS: point of no return
On Valentine's day his progressed Venus was opposition natal Pholus, indicating a point of no return in love. Transit Pholus inconjunct Progressed Moon (if time is correct) and trine Eris is mirroring the starting point of change in habits and home, along with discord. And the conjunction with Uranus promised an unexpected and sudden beginning.


There were more three inconjuncts (quincunxes) warning for getting out of balance and possible loss.
But, there is also Progressed Mars conjunct Progressed Jupiter and semi sextile Eris. A major effort? A recent successful match or year? Progressed Venus had recently been conjunct natal Jupiter and that is usually a statement for having a party and enjoying life and love. That is corresponding with what family told the media.

Astrology can't tell you what happened or what will happen and is no big help in a 'who done it'.  Astrology simply adds an astrological picture of a moment in time to births and events that should be seen in the light of gender, genes, circumstances, situations and the choices that people make.


*) Also see Brutus about angularity and Pluto on MC:
http://www.dearbrutus.com/angularity.html