Astrology of Pope Benedict stepping back 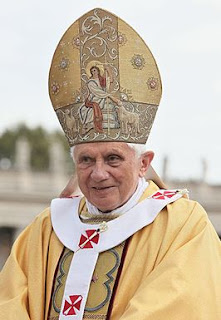 There have been a number of posts about Pope Benedict on this blog and they were often wrapped in a blanket of worries about his condition, but...as a true 'Saturn calling' *) he remained on his post. Now he steps back and even though he is 85, the head of a world church in trouble and apparently not healthy, people are surprised. They are surprised because popes tend to be pope until they die. Watch the chart, progressions and transits, consider the man and his situation, and see that there is reason enough to have some rest.

1. The progressed chart has Pluto on the Ascendant. Pluto rules the 8th natal house of life and death and is in the 4th of endings. Pluto on the Ascendant describes stressful situations and pressure (though he says there was no pressure on him when he decided to stop on February 28). Something transforms when Pluto is on one of the corners of the chart.


2. Transit Uranus square progressed Mars (important because of the opposition with Midheaven in the natal chart) means change, too.

3. Progressed Sun quintile Progressed Chiron might be creative in a healing process or point at the creative attendance of doctors.

4. On February 28 transit Jupiter is novile Progressed Sun for rejoycing that life gets better.

5. The most negative aspect is transit Neptunus quindecile progressed IC. It focusses on a weak basis.