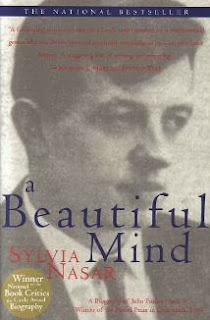 The movie 'A beautiful mind' was inspired by John Nash, the brilliant mathematician who died May 23, 2015 in a car crash with Progressed Sun square his Saturn, to signal a period ending. The movie is  about the period just before he was taken to hospital after being diagnosed with schizophrenia. It took 30 years to be able to live in society again. Here is the chart with transits and progressions for February 1958, when he entered hospital.

What is important in the natal chart are:
- Uranus without aspects within orb 5 degrees
- Sun/Moon semi square Uranus AND opposition Lillith
- Pluto conjunct Ascendant (getting over the Ascendant by progression)
- Jupiter rising before the natal Sun
This is highlighting Uranus and Pluto, and signaling stressed nerves, but also Jupiter and Pluto (successes) and the issue of being different (Lillith and Uranus). The Astro ID gives all the keys.

In February 1958 there were a few important aspects to consider:
1. Saturn was in the 6th house of illnesses, inconjunct the midpoint Ascendant/Midheaven. In the natal chart, this midpoint is conjunct Chiron, showing the crucial importance of healing. Inconjunctions (quincunxes) are frequent in moments of illnesses or when balance is lost (perhaps due to having to give up on something or someone).
2. Transit Uranus is square Ascendant/MC (and Chiron) and transit Pluto is inconjunct MC, so that both of the most highlighted natal planets take part. It was a time of extreme intensity, with a risk for the position in society, too. This is a combination for resistance, too.
3. Progressed Midheaven conjunct Jupiter and transit Jupiter opposition Progressed Midheaven and conjunct Jupiter is a triple indication for getting support, help and advice (often given by a doctor)

The fact Saturn and Uranus are in hard aspect with AC/MC at the same time illustrates the issue of 'breaking free or limited freedom'.

It is because someone asked me to have a look at Lillith, too, that I included Lillith in the chart and in this case Lillith is very important. Lilith is inconjunct Moon, conjunct MC and opposite Sun/Moon. That makes it hard to be 'normal', especially since Uranus is semi square Sun/Moon, too. A genius is always a bit 'different' and so was John Nash. Uranus and Lillith seem to indicate this.