FIFA, the arrests, the election and astrology 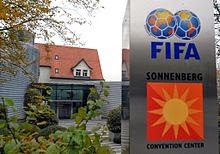 A 'head in the sand', obstinate, busy loner with concealed fear, that is what FIFA would be if FIFA was a man. Fortunately, FIFA is an organization: Féderation Internationale de Football Association International. Many millions of dollars and important decisions are made in that organization. Today 8 officials, including 2 VPs, have been arrested on charges of corruption. This happens now that Transit Saturn keeps hitting the natal Sun in the first degree of Gemini. It is not over, yet...The Swiss government announced a second investigation. And Saturn will be back, too...
It may end a period in history for FIFA, but it will not be the end of FIFA. This Saturn transit happened before and FIFA survived it.

Of course, any international big organization risks fraud and corruption, especially when large amounts of money and prestige are involved.

This happens now that FIFIA President Sepp Blatter wants to be re-elected (it would be his 5th term) on Friday with transit Jupiter exactly square his Midheaven (and transit Pluto trine Midheaven). Jupiter+Pluto: that is a great combination when you want to win any contest. Transit Pluto is also trine his progressed Moon. I don't know what transits and progressions the other candidate has, but he 'd need a lot of fortunate aspects to conquer this. And...although Sepp Blatter is a Political Exposed Person (PEP) in Switzerland, were the 'raid' took place, and even though he is the 'CEO', he was not arrested. Whatever happens, Blatter seems to be immune (with the help of Sun square Jupiter and semi square Uranus perhaps).

If the accusations are true, the fact is that he was in charge all the time and in a way this 'communicative busy bee and pilar of strength' (color horoscope Astro.com agan:) is formally responsible and the organization as a whole is to blame. Criticism comes with Saturn. Saturn hits FIFA's and Saturn hits the natal Moon of Blatter, too (transit Saturn semi square Moon). One of the interesting aspects between the charts of Blatter and FIFA is Pluto of FIFA square the natal Sun of Sepp Blatter. FIFA influences his life and life style and FIFA causes stress, too. I bet that it does, right now! Saturn-Moon transits makes you feel bad. But for how long? Transit Uranus will be conjunct the important Jupiter of FIFA soon and this aspect is the symbol of relief.

Above is his chart with transits and progressions.

PS BBC news mentions that his tenure as president outlasted three marriages. It is a man of status and duty first (Saturn rising before the Sun), a true manager. He is now motivated with the drive to win always (Sun/Moon midpoint in hard aspect with Mars semi square Pluto in the progressed chart). Pluto doesn't make major aspects in sign or orb 5 degrees in the natal chart, so that power play, strategy, stress and authority is highlighted, just as the Mercury-Venus-Descendant position helps him communicate with diplomacy and kindness. And how about the Leo Ascendant? This gives him the attitude that it takes to be a President. There is more in that chart, of course (like Ixion in hard aspect with Sun/Moon), but the Astro ID says it all:
- Saturn rises before the Sun
- Mercury and Venus are angular
- Pluto is 'calling'
And then you get a communication strategy that fits a politician and a die-hard in love and relationships. Plus financial management.

Time will tell what happens next and if transits of Jupiter and Pluto help you win no matter what.

WoW What A Astrology Blog site, Its Really Interesting, I Like it Always, ts Must Helpful For Human, Thanks Admin.

It is C rated and on Astrodatabank http://www.astro.com/astro-databank/FIFA

And yes, Blatter had a real better chart!:)

I see the Prince has conceded defeat...

I have to study Fifa's chart (but not yet - I have another one that I must study first!).

One more thing: sun of Blatter square Mars of the prince means compeition between them but the Sun is king, always

Great Content. I appreciate getting this reliable information from you.
Thanks for sharing this great content. I love reading your posts. They are inspiring. I have some relevant information you can review below.
Lottoroo experience