TURKEY, the charts of ERDOGAN AND GÜL 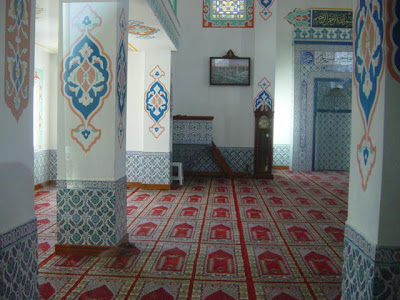 Monday 28th July, the Turkish court will judge the APK, the political party of the President (Abdullah Gül) and Prime Minister (Recep Erdogan). The question is whether this party is involved with political Islam. If so, the party will be forbidden.

On 28/08/2007 21:22 I wrote about the president:
ABDULLAH GÜL PRESIDENT
Abdullah Gül has become the president of Turkye today. Gül is a very religious man. Watch the chart (October 29, 1950 Kayseri, time unknown):

- Neptune is oriental (rising before the Sun)
- Jupiter is calling (no Ptolemaic aspects in sign or orb 5 degrees).
The combination of a prominent Jupiter and Neptune is the combination that is frequent in the charts of monks, popes and other persons with a strong spiritual conviction. Religion is such a conviction. On the day that he became a president the transiting Sun was in aspect with his progressed Jupiter and Neptune.

The opposition in Turkey wants to keep the state and religion separated and is not happy with his president. Gül could expect problems within two years time, because the progressive Sun is going to make a frustrating sesquisquare with Pluto. The progressive Sun of Turkey changed sign in 2007 (when he became president). And the progressed Sun of Turkey will be square Saturn before 2009. It seems that 2009 won't be the best year for the nation or for the leadership.

For the time being he has the progressed Sun sextiel Jupiter, but...Jupiter is inconjunct Saturn in his chart. There is no advantage without disadvantages with such an aspect. 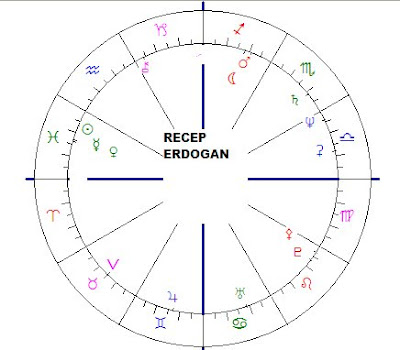 RECEP ERDOGAN
Recep Erdogan, the prime minister, was born February 26, 1954 in Istanbul with Sun in Pisces and Moon in Sagittarius. Those signs are being 'ruled' by Neptune and Jupiter, the combination for the spiritual conviction. It gives a religious or spiritual character.

Transit Saturn opposition his natal Sun and Neptune (disposing of his Sun) opposition Pluto is reflecting the situation of today, with confusion and disappointment in hard times. 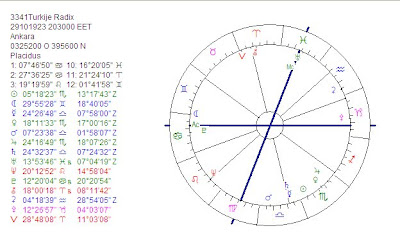 This all does not look good for Turkey. But let's wait what happens on the 28th. Whatever happens, it might be hard and difficult afterwards.