THE HOUSE AND CHART OF TOM CRUISE AND KATIE HOLMES 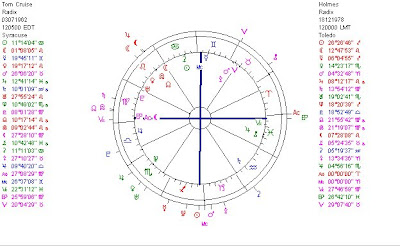 Sun, Venus, Mars and Neptune are prominent in the chart of Katie Holmes. With Neptune oriental she is the perfect dreamer to catch up with the beliefs of her husband, Tom Cruise. She lives with him, his mother, his sister and her children in one (I hope:) large house*). And it seams she is considering a move. Maybe that is because transit Uranus is opposition her Northern Node - for independency towards a group -? Or is it the progressed Sun getting close to Mars? I know that Sun-Mars progressions manifest the will to be self supportive and do your own thing.

MOON CALLING, CERES CONJUNCT SUN
Why is Tom Cruise living with his mother anyway? He has Sun inconjunct Saturn and that might make it difficult to have a life (without a parent) and ...to have a life (WITH a parent). But most important are:
- the calling Moon for the importance of habits and needs,
- and the fact that Ceres (symbol of heirdom) is conjunct his Sun and oriental.
He wants to live (Sun) close (conjunct) to his inheritance. And he is the one who is to provide for them. With Ceres rising before and conjunct the Sun he will be pleased to nurture baby Suri. I have the feeling that Ceres had an important role to play in 'Dynasty':)

SHARING THE MOON SIGN
For the issue of living together it is nice to see that Tom and Katie share a Moon in Leo and feel comfortable in each others' presence. They share the same needs and are easily adapting to each other's habits. There is of course interaction between their charts. Some of the synastry-aspects will be helpful to keep the relationship going, others are not.

They share Mars afflicting Uranus (he square, she semi square). Click for the article to find out what it means. Mars square Uranus is one of the indications in a male's chart for divorces. Tom Cruise already had one. Katie also has an indication for divorce: Venus conjunct Uranus (marrying impulsively).

DIFFERENCE IN AGE
Katie Holmes married a man who is 16 years older than she is. Venus sextile Saturn is one of the tightest aspects in her chart. In marriage and relationships she prefers to have security. When she married Tom Cruise - who has Saturn in the 5th house -(on November 18 2006) she had transit Saturn inconjunct and transit Uranus semi square her progressed Sun. It is rather strange that she had a composition for restricted freedom. Another transit on that day is Uranus semi square progressed Mars. That is the same aspect that they share! It seems that the marriage iniciated a whole new adventure for both of them.

The relationship with Katie made Tom Cruise very enthusiastic. He had the progressed Moon opposition Venus in 2005, when he fell in love and his Ascendant changed sign. In the first half of 2009 he will have progressed MC opposition Saturn and progressed Sun square Mars. That might be a good moment to split up with his family and start his own life.

More about the chart of Tom Cruise...