When the ladies smile...
like in the chart of François Mitterand 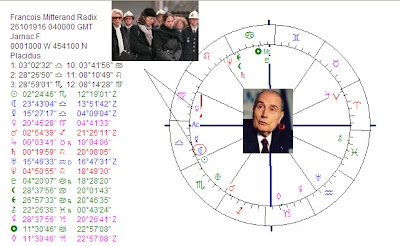 92 years ago on October 26 François Mitterand, the late French president, was born. He was married, had a sort of an official mistress (see the portrait of her and their daughter at his funeral) and several lovers, too. Does it surprise you that Pluto was conjunct his natal MC*)? And that Uranus in the fifth house was related to Aries Point***)? And that the Moon was oriental (for an orientation on females, perhaps:) with Venus - the goddess of beauty and love - calling! We see Moon, Venus, Pluto and Uranus prominent and we get a picture of falling in love (Moon-Venus) again and again (Uranus) in an intense way (Pluto).

This reminds me again of the famous song of the Golden Earring (When the lady smiles, you cannot resist her call...**) Mitterand had the money and the power to impress several calling ladies. And the chart to have difficulties in resisting the call!

It is amazing that his wife tolerated this, but yes: he had Mars biquintile Uranus for being creative in his 'special efforts'. He also had Venus semi square Neptune and could have faced a divorce with the two aspect. Jupiter in the equal 7th house surely ment that he had more than one partner and that he expanded his relationship. It would be interesting to see mrs. Mitterand's chart. What made her stay?

Mitterand was above all a politician, an influencial man*). His own needs (Moon) were followed (Moon rising before the Sun) and he had a vocation for diplomacy and charm. That is how he did it. He also had Venus in Virgo (and so he liked young women and was just as cool as other charming persons are). And there was a connection between his powerful position (Pluto-MC) and the amount of women in his life (Venus sesquisquare Pluto). That explains, doesn't it?

*) Pluto symbolizes power, politics, money, challenges and danger and...sex. When Pluto is conjunct the Midheaven or on top of the chart (square Ascendant) we may expect one of the mentioned words to be important in the life of the nativity. Princess Diana had Pluto on top in the 7th degree of Virgo, a degree for a Cinderella complex. Not only was her death (Pluto) of importance to many, sexual affairs and money was also importance in the chart of that influencial (...) lady.
BTW Barry Hay, singer of Golden Earring was born on August 16, 1948 with an oriental Pluto!:)
**) Hillary Clinton used this song in the pre-elections, but when people allerted her about the nun being molested in this video, she stopped using it.
***)Uranus with Aries Point: he was known for being controversial and was a socialist politician.

RELEVANT:
More about Venus and Pluto