THE LINK BETWEEN ANGELINA JOLIE, JENNIFER ANISTON AND BRAD PITT
The shared idol

Sharing a man, sharing an aspect...The charts of rivals in love often have much in common. It may not be much of a surprise, when you are living with the same man or woman for a while and your names seem to be linked forever. But it is surprising that it is so clearly visible in the love triangle Pitt-Jolie-Aniston.
The famous three are united in their -past- love for each other. Angelina Jolie married Brad Pitt, but Jennifer Aniston was his first wife. This love triangle was in the news today. Jolie now says that she and Brad Pitt fell in love when he was still married with Jennifer Aniston.

Here you see the link between their charts and their divorce. In short:
1. their charts are connected by Sun-Neptune aspects
2. their charts are connected by Sun-Uranus aspects
3. Aniston and Pitt shared Venus-Jupiter (and her Venus is opposition Jupiter)
4. Jolie and Pitt share Venus-Uranus (both have Venus-Uranus conflicts)
Continue for more specifications and for links to other post/articles about matching, sharing aspects and relationships. See also on the left (labels). 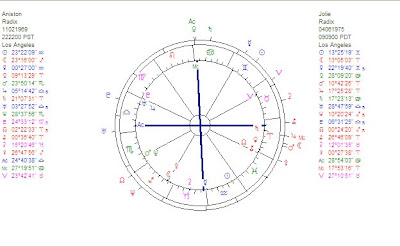 SHARING AN IDOL AND SUN-NEPTUNE
Angelina's Sun is quindecile (165 degrees) Jennifer's Neptune. Jennifer's Sun is quintile (72d) Angelina's Sun. Aniston's Sun is square Neptune; Jolie's Sun is opposition Neptune. They share an aspect that is not uncommon in the charts of actors: the aspect of a sort of a double life. They are not what you think you see. In my article on Astromarkt about sharing aspects I wrote this about sharing Sun-Neptune:

Sun and Neptune shared in aspect gives you shared ideals, dreams and faith or even a shared idol! But with hard aspects you might share the same disillusions as well or this relationship is disillusive. Cooperating could work out best in an asylum or in a non-profit organization where they can help others, and each other.

Another possible combination is between enemies and with Sun in hard aspect with Neptune shared. Ideology stand between you as was the case with the murderer of director Theo van Gogh who shared Sun square Neptune.

THE PERFECT WRONG MAN: ANOTHER ISSUE
That is what Angelina Jolie and Jennifer Aniston share: Brad Pitt and Sun in a hard aspect with Uranus. Pitt has Sun quindecile 105 degrees Uranus. A perfect match! He is the wrong man and they want him:).


RELATIONSHIP PITT-ANISTON
Brad Pitt and Jennifer Aniston did not match much. Their sun signs matched, but their moons did not and though his Venus was sextile her Mars, his Mars was square her Venus. There was passion. But Jennifer Aniston has Sun square Mars and Mars inconjunct Saturn in her chart and those are two of the four indications for a divorce in the chart of a female (the others are Sun-Uranus and Venus-Uranus). As it was her first marriage, it was likely that there would be a divorce, in particular in her social environment. Also notice Saturn on the descendant of Aniston's chart and the sesquisquare between rulers 1 and 7: Venus and Mars. Those are exactly the planets of importance in their synastry!

What he shares with Jennifer Aniston is Venus-Jupiter. She has the opposition (expecting too much of marriage and love) and he has the quindecile 75 degree aspect.

This marriage was a passionate one, but as both expected too much of it, and both could have more than one marriage (and this was their first...)....it ended.

RELATIONSHIP PITT-JOLIE: MARS SQUARE MARS
Aniston and Jolie share Sun-Neptune and see: Sun opposition Neptune of Jolie is on the horizon of Brad Pitt's chart. There is a link, as to be expected.
Jolie and Pitt do not match much. Sun, Moon, Mercury, Venus and Mars are in conflicting signs. And the tightest conflict is that of Mars square Mars. I have seen that before: McCartney-Mills, Mars inconjunct Mars. And Van Basten-Van Nistelrooij: Mars square Mars. Fire! And it is only to be wished that they keep it in control.

What Jolie and Pitt share is Venus-Uranus. She has the square, he has the sesquisquare. They will love excitement and changes. Probably that is why they are moving around the world so much. As long as they keep moving and keep the fire in control, this relationship will continue. But will it last forever? With so many children, let us hope so... 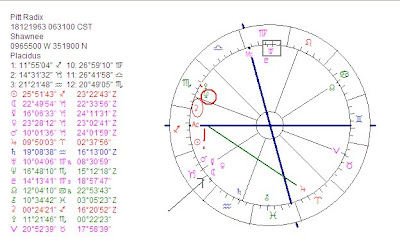 BRAD PITT
The subject of their adoration and love is Brad Pitt. He is the guy with Moon conjunct Venus (attractive for women) and he is the guy with Gemini on cusp 7: for more than one relationship, maybe at the same time. Mars-Uranus-conflicts are not helpful in marriage, in the chart of a male, but Pitt has Mars trine Uranus. Maybe that makes him good at switching. Notice the cool Moon and Venus and the conflict between Jupiter ruler ASC and Mercury ruler DESC (translated light by Mars and Pluto) and you see that there is a potential for divorce.


READ ALSO:
About Paul McCartney and Heather Mills and Mars inconjunct Mars
About Jennifer Anistons latest relationship and how even matching signs can collide...
About sharing aspects and what these aspects mean...
About matching signs
About the romantic Neptune, killing you softly