NEPTUNE for killing you softly

Love is a hot item. It seems everybody is looking for the perfect match and nobody wants to have romantic failures, suicide out of grieve or having to wait (in abstinence, of course) till age 70 to be together again. It is now or never! Neptune is under valuated:) Is that so?

Let me introduce you into the world of romantic love. Once upon a time there was a poet in my country (Herman Gorter) who wrote a very impressive poem about the death of a female friend. It was called 'In the black night' and it describes the way she died, drowning herself. I cannot fully translate it, but I will give an impression of the sentences that I like most of all. You know, I just love poems and their emotional impact:)!

she was standing, very still
and the tree, born long ago,
had guessed it by then -
and the wind and the clouds stood still
they had not thought of it before,
or else they would not have flown
and they would not have taken her there
(...)
Wow, that is romance. Herman was a friend of the family and he was struck by the death of the young singer, Anna Witsen, on March 5, 1889. She threw herself into the water, because of grieve out of love for a married man. And I have her chart. 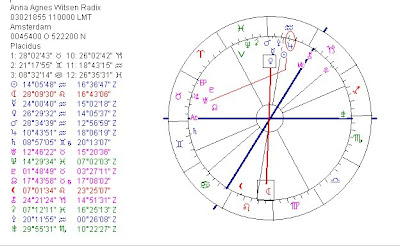 She was born February 3, 1855 at 11:00 LMT in Amsterdam, the sister of a painter. She was talented and well known. Venus was high up in her chart, Jupiter was oriental. You can easily see the drama in her chart:

Please consider the period in time (the ROMANTIC period) and the position of women (who should not be involved with married men, if they ever wished to be married themselves).And who knows, maybe she was pregnant.

SATURN AND NEPTUNE
On March 5, 1889, the ticking biological clock in the shape of Saturn was opposition her natal Sun and inconjunct Neptune. (Do we see something sick, sad and ill?)
Neptune was of importance that day. Her natal sun was semi sextile Neptune. And there was transit Sun conjunct Neptune that day, to activate the issue. And yes, transit Neptune was also square her progressed Midheaven for the illusions.

It is unusual 'romance', even for the romantic 19th century. Her tragic death inspired one of Holland’s' best poets and that is why I posted it. Her Neptune was trine his MC**). Suicide may be a source of inspiration, but for most of us, the ultimate effect of a sad Neptune can be missed, like tooth ache!

PS In the chart of Anna, Venus-Mars is 75 degrees from Uranus, adding a sort of an obsession or compulsion to the passion (and maybe this is relating the passion to an impulse?).