I was in the middle of translating the reading of the chart of Charles Manson for my site Astromarkt. Then I noticed an article on CNN about the Manson family and their demands for parole. The murder was 40 years ago now. In May of this year there will be another attempt to free Susan Atkins (who has a brain tumor). And the parole will probably be denied, again.

I wrote about the birth chart of Susan Atkins, last year. And now I wondered if their was an astrological link between the charts of Susan Atkins and Sharon Tate. The killer is Charles Watson, but Susan Atkins held Sharon Tate down so that he could stab her. She participated in the killing.

I found a lot of trines. They were abundant in the chart of Sharon Tate. She and Susan Atkins share a grand trine. And their charts are connected by trines, too. 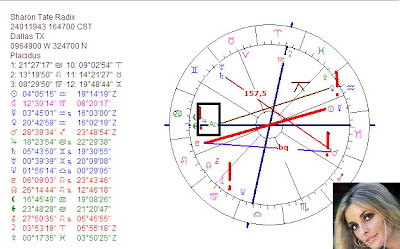 Sharon Tate's chart has the Moon, Venus, Mars and Jupiter without Ptolemaic aspects in sign or orb 5 degrees. These are the planets of being a woman, of having success and of enjoying life. She has a grand trine of Sun, Saturn and Neptune, tightly. The grand trine is considered to be fortunate. And of course, Sharon Tate was a beauty, she had success and money.

The only thing is that Mars is biquintile Pluto and 157.5 (135+22.5) degrees from Saturn. Saturn is sextile Pluto. Mars-Saturn-Pluto is the combination of the danger of untimely death.

CONNECTION
The connection with Susan Atkins is found in shared aspects and progressions of Saturn and Pluto.

B. 9 AUGUST 1969
In the year before her death, the progressed Sun of Sharon Tate had changed sign, to indicate a different life style (maybe as she was pregnant). Her Sun had just been square Uranus. This is a signal that her life changed in a sudden way, related to 'life and death'. The aspect had occured already. But it says: sudden transformation related to 'life and death'.

C. 22ND DEGREE, BLACK MOON AND INCONJUNCTION
The 22nd degree is not a fortunate degree. The Black Moon seems to show the dark side of the moon. And the inconjunction reflects losts and losing. These 3 are relating one chart to another.

The Ascendant of Sharon Tate is in the 22nd degree of Cancer, inconjunct the Black Moon of Atkins (in the 22nd of Aquarius) and inconjunct her own Venus in the eight house (perhaps an indication for the disproportionate way to die by the hands of a woman).

Trines sometimes seem to make it easy to die (the hard way). Venus is not always nice. Jupiter doesn't always protect you. And nice trines in synergy don't seem to mean a thing, sometimes.

MEETING THE WRONG PEOPLE AT THE WRONG MOMENT
Also read the article on Astromarkt.net about meeting people at the right (or wrong...) moment. Victim and killer met when they both had a combination for hard confrontations with others in their progressed charts. And they happened to have 'hard confrontations' in their natal charts (Sun-Saturn-PLuto), too.

How to explain that? I wish I knew.

OTHER POSTS:
I noticed another post about the chart of Charles Manson on this blog...

See the story of the gigolo and his grand trine...

I was surprised as much as you were when I saw sharon tate chart.. incredible. But maybe I found an answer in these last years of my life. FIRST Karma. I'll be very basic in my explaining cos I don't want to try to convince anybody just saying my point of view. When you establish your life in LA means a lot. Even if you pretend not to know ..deep down you know where you are. Making those sort of horror movies that she did. Marry the man she married.. if you have been given a beautiful opportunity and you decide to spend it this way.. you are abandoned. And when you walk alone the dark comes immediately into your life and... bang. The pleasure of killing is probably greater when is over such a beautiful creation... if you know what I'm talking about.. life is all about choices. Life is not prescribed life is all matter of choices. Because we born with the greatest freedom and depends on us how we spend it.