Chart of Helg Russak, gigolo
and the grand trine 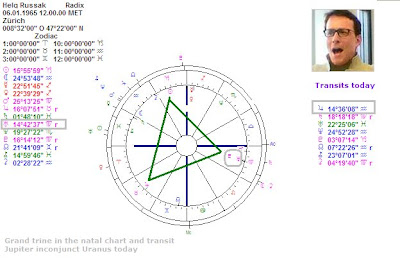 Remember the post "Was it worth it, Pluto inconjunct Venus'? It was a story about a rich lady with a gigolo. Now I know the name and birth date of the man involved: Helg Russak born in Zürich Switzerland on 6 January 1965, time unknown. It was a birthday with a tight grand trine. He managed to be a success for a long time. He is the man who tried to blackmail  a rich married woman who got 'involved' with him, just like other rich ladies. Today he confessed that he was guilty of the crime and today he had Jupiter inconjunct his Uranus for a relief, but...with a kind of lost, in this case: freedom.

Well, how did he manage to win the trust and love of the ladies?

GRAND TRINE
First of all: he has that grand trine. It is a trine composed by Sun, Pluto and Jupiter conjunct Uranus. This promisses successes because he has self confidence and because he is inventive. Also Venus is 157.5 Jupiter/Pluto for great progress in love. But apparently not enough to become rich and live happily ever after...Why not?

BLAME ON SATURN?
I blame it on Saturn. Saturn is semi square Sun, quindecile Pluto, and 75 degrees from Jupiter. Saturn is also 'calling' (not making Ptolemaic aspects in sign or orb 5 degrees). That means that he was ambitious at any possible level. And as Saturn was semi square Sun, at about age 45 he would have Sun conjunct Saturn. That is within a year from now! His progressed Sun sign is changin sign and that means that life is changing. When he was arrested the progressed Sun was quindecile Uranus. The combination of Saturn and Uranus reflects restricted freedom.