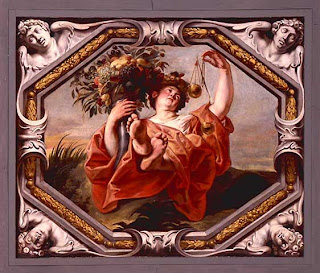 Margareth Hone was a well known British astrologer and a Libra, born on October 2, 1892. She was known as Peg Hone in the 50's of the 20th Century.
Margareth Hone helped founding The Faculty of Astrological Studies in 1948. She worked with the important British astrologers of her days. What Libra can do for astrology, is finding allies and seeking balance working together and finding diplomatic ways to communicate the meaning of the chart.
She helped to found the UK Astrological Association. She wrote "The Modern Text Book of Astrology".

This is her chart. The transits and progressions are for the day of her death (see Progressed Sun inconjunct Progressed MC and transit Neptune - ruler 8th house of life and death - square Ascendant).

JUPITER URANUS
Most astrologers have a Jupiter-Uranus connection in their charts. It is different and not so obvious in the chart of Margareth Hone. Venus is in aspect with both Jupiter (trine) and Uranus (quintile). The Aquarian Moon (ruled by Uranus) is in minor aspect with Jupiter (67.5 degrees, a half sesquisquare).

Her prominent placements included the Mercury-Saturn conjunction rising before the Sun and the Venus-Chiron conjunction with the Ascendant. I'd say that this Mercury-Saturn points at the importance of science (and ambition to write or give instructions). There is a big trine between Sun, Moon and Neptune-Pluto in the 10th house. Neptune and Pluto are the planets of mystery and the ' supernatural' or say: spiritual. Maybe she was highly sensitive? (Was she involved in theosophy, like Carter?)
The elevated Vesta tells us about dedication, above all.

As you may notice, Jupiter and Uranus are prominent in the chart of Carter. Jupiter rises before the Sun and Uranus is conjunct Ascendant. Jupiter is half semi square Uranus. Maybe that prominence tells us how important astrology was for Carter. This is his chart

The picture above is Jacob Jordaens idea of Libra (17th Century), found on Wikipedia.

2. C.E.O. Carter wrote 'The astrology of accidents' and I wrote about that on Astromarkt: http://www.astromarkt.net/accidents-and-astrology.html

3. I plan to write about an astrologer each month. Here is the link to what I blogged about Virgo astrologer Zipporah Dobyns (who worked with asteroids, the small objects...)
http://astropost.blogspot.nl/2012/08/virgo-astrologer-zipporah-dobyns.html
What the sign of Virgo can do for astrology is:
- keep up the standards and never believe it all- contribute perfect data- find ways to use astrology in every day's life (without drifting away, I mean)

4. About Jupiter-Uranus and the charts of astrologers:
http://astropost.blogspot.nl/2009/02/jupiter-uranus-and-charts-of.html

5. About aspects between Jupiter and Uranus and midpoint combinations with Jupiter/Uranus: http://www.astromarkt.net/jupiter-in-aspect-with-uranus.html

6. Neptune and Pluto; combination of the silent force
http://astropost.blogspot.nl/2008/06/neptune-and-pluto-combination-of-silent.html

and see the labels for more background info!