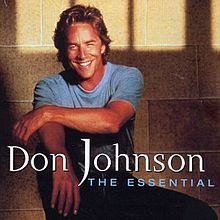 On the way to the office I listen to the radio in my car and this week there was an 80s week. That brought me back to Miami Vice. I confess: in the 80s I was a Miami Vice fan, especially because of Don Johnson. Looking back, I can see why (well, who can't:)?). It must have been the combination of the music by Jan Hammer, the fashion, the cars (I love fast cars) and the man…It is also a Venus-Uranus thing.

I didn't 'fancy' movie stars since I was a teenager, so Don Johnson had something special. There is an astrological explanation: his Venus is inconjunct my Uranus. His Venus is also inconjunct the Uranus of many women (and men!) of my age. Venus-Uranus: that is an exciting aspect…! The quincunx points at the exaggeration.

Of course, I was not his only fan, at the time. But there is more in the synastry. Perhaps that is why I even bought his CD. It is:


Jupiter always helps to make you a fan. 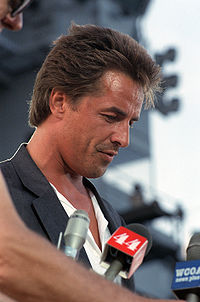 There is also his Sun conjunct my Chiron. Every person born on December 15 has the Sun on my Chiron. I can heal them all:). You see, I checked the web for the synastry Sun-Chiron and found something about healing and teaching here ( http://www.astroknowlogy.com/questions/sun-conjunct-chiron-in-synastry).

Of course, I never met Don Johnson and our worlds are far apart (geographically and socially). Even if we were neighbors, his Saturn square my Sun could have been standing between us.

Here is his chart with today's transits and progressions.

ACTOR
Don Johnson is an actor. His Sun is in minor aspect with Neptune (a semi sesquiquadrate, 135/2=67.5 for the reader with an eye for calculations). Sun-Neptune aspects are not uncommon in the charts of actors in series. They sometimes take over the habits and attitude of the character they play. See Astromarkt about Sun-Neptune and identity questions (am I who they say that I am?).

The Moon rises before his Sun and is square Venus. There is no closed pattern of talent like in the charts of other actors and artists. His MC in the first degree of Gemini is in minor aspect with both Venus (112.5 d aspect, square + half semi square) and Neptune (wider sesquisquare). So Midheaven is in aspect with Venus and Neptune and via Venus with Moon. Circumstances (the public) are important in the reason why he works in the entertainment industry.
Mercury rules the MC and is in the 5th house of entertainment. The final dispositor of the Midheaven is the prominent Moon. An important Moon helps to keep memories alive and to act.
He has Venus biquintile Uranus, for creative rhythm and for a creative way to be attractive again and again. Maybe that is why he married Melanie Griffith twice.
BTW The chart is AA-rated by Astrodienst. That is because a not named friend said that he looked at the BC. I hope that is correct.

FATHER AND PARTNER
Don Johnson has six children now (watch that Jupiter - symbol of 'a lot' in the 5th house of children!)

He married Melanie Griffith (twice), even though their Venus don't match at all (his in Aquarius, hers in Virgo).
He also had a relationship with Barbra Streisand. They had a Mars square Mars synastry (fire and …fight later) and his Jupiter and Uranus were in hard aspect with her Sun and Pluto. They had an affair in the years that his progressed Sun was in aspect with both Jupiter and Uranus! Barbra Streisand came into his life when sudden windfall and positive changes happened or maybe she was the positive change of his life. However: his Scorpio Moon in hard aspect with her Sun/Moon midpoint shows attraction. But her Saturn opposition his Sun/Moon midpoint could have been the breaking point. Perhaps the age difference (a Saturn issue) did it.

LIFE AND PROGRESSIONS/TRANSITS
Until Miami Vice Don Johnson didn't have much success. But he was good looking in the 80s!  When Miami Vice started on September 28, 1984 there were signs of change.

- his progressed Sun was in the last degree of Capricorn, about to change sign
- transit Pluto had been inconjunct MC (stress, change with a loss or lacking balance)
- progressed Midheaven was about to make a quincunx with natal Jupiter (progress but having to give up on something to achieve it)
- in the progressed chart MC conjoint Uranus (square Ascendant), signaling a significant change in his position in society
- also in the progressed chart there was Pluto semi square MC and AC: a challenging and sometimes difficult change in status and situation.
- Venus was trine Neptune in the progressed chart. There were golden chances for the artist and for romantic affairs.
The inconjunctions or quincunxes seem to mirror the exceptional and unbalancing success. In total the list above includes 5 signs of change.

Those aspects where when the most successful years in his life started. I think that the first aspect in the new (progressed) sign says a lot about the nature of changing life style when the progressed Sun changes sign.

For Don Johnson, the first aspect to make in the new sign was: Progressed Sun conjunct Jupiter and inconjunct Uranus, this within 4 years.

THE YEARS AFTER
But then, in 1992, 8 years after the start of Miami Vice he started drinking again. His attitude during the making of later series seems to have been bad (arrogant behavior: Jupiter inconjunct Ascendant).
In May 2008 he almost lost his house. That was with transit Saturn close to the Ascendant, after Transit Saturn square MC and with Progressed MC inconjunct Sun and Progressed Sun. Also transit Pluto was inconjunct his natal MC and conjunct progressed Moon. It must have been a hard period of stress.

With transit Pholus coming up and the progressed Sun about to change sign again, other changes in the life of Don Johnson show up on the horizon in the next two years. The days of Miami Vice have gone.

NOW
He is 63 now. Progressed Venus is close to conjoin Jupiter and have a party, a wedding or at least: more luxury and fun. Progressed Mercury conjunct Jupiter, not long ago. In December 2012 he was with Jay Lenno. In January he was paid 19 million dollar for his share by Rysher Entertainment for  half of the copyright of Nash Bridges, enough for retirement?

LINK
Let me end this with a link to YouTube where you find a lot about Miami Vice and Don Johnson, starting with the December 5, 2012 appearance at Jay Lenno's show:
http://www.youtube.com/watch?v=NAt1KDMVRhg

And you know what? That was with his progressed Venus inconjunct his Uranus! He did it again: the women screamed! Venus-Uranus: flash back.

Also visit: Astromarkt.net for example about the aspect Venus-Uranus and midpoint Venus/Uranus