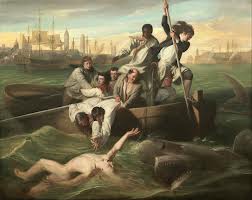 Pisces is often regarded as the sign of sweet romance, fancy dreams, ideals and self sacrifice. I see Pisces (especially MC, Venus or Moon in Pisces) in the charts of artists, too (see Art&Astrology). There are probably millions of nice Pisces. Most signs have more than 80% nice folks, I bet! That is also true for Pisces. But when those born under Pisces drift away in nasty fantasy or destructive ideologies, beware! The Sun is moving to Aries now. Time for a look at the edge of Pisces.

Here are 3 Pisces who weren't soft at all. Pisces is also the sign of enslavement and drugs, of victimizing and 'letting go'. On the edge of Zero Aries, I show a few bad Pisces. They acted like sharks.

1. JOSEF MENGELE
The chart of Josef Mengele (sadistic doctor in Auschwitz) is an example of that. The 'harmonious' sextiles and trines didn't help his victims. What is in that chart that made him so cruel? Why didn't he have a heart?

Mengele is a Pisces with Libra Moon inconjunct the Pisces MC.  Venus is square Neptune. It is a kind of a pattern of artistic talent like the ones that can be observed on my blog Art&Astrology. In 1943, when he entered Auschwitz, transit Neptune was trine his Progressed Venus. Venus trine Neptune (romance, affairs and artistic visions): it's such a contrast given the situation!

Meanwhile transit Pluto was about to conjoin his progressed Ascendant. He had a motor accident and fever soon after his transfer to the horrific place where he was given free hand in medical tests with (for example) twins.

This man choose to become what can be seen in the chart if you read it in the darkest sense. H was a fanatic (Sun square Pluto) activist (Mars rises before the Sun!),  follower (MC and Sun Pisces) of the Nazi ideas. With Sun conjunct Eris he lived amid and with discord; in fact, he joined it.
He studies to be a doctor (Chiron in the 9th house?) but he became a torturer in the end. In between he served in the army (Mars). But all the time he followed the road that suited him best, caring for his 'group' only. That is because of Mars-Saturn-Pluto and the calling Moon square AC and inconjunct MC.

What he became might be related to the position of the Moon and of Mars.
- Mars rises before the Sun, is in the 8th house of life and death, square Saturn and biquintile Pluto. The Mars-Saturn-Pluto combination often mirrors brutal force to achieve a goal. It is the combination that can be found in the charts of those who deal with the issue of unnatural death (of themselves or as a theme in life). Saturn is semi square the midpoint Mars/Pluto.
- Moon is in Libra, not making narrow major aspects. The Moon is inconjunct Midheaven and in the fourth house. When the Moon is 'calling' there can be emotions and 'feelings of
Quoting myself:


- Moon without aspects attrackts children. Everything related to children (education, care) will be highlighted. The Moon is of importance for memorising, like in history and when you play a certain role on stage, but also for cooks.- The other side of the calling Moon is that what you need is so important, that sometimes you are overruled by your needs. If this Moon rises before the Sun, the person involved will be lead by needs and emotions.

When the Moon is 'calling' habits and needs may take over. There can  be emotions and feelings of 'belonging to' at any possible level. This man didn't have compassion for those who didn't belong to his 'family' and 'group of people'. His 'calling Moon' was out of balance and he gave up on emotions (inconjunct Moon) for his goals (MC). He never felt sorry for what he did. He never had to pay for it. All that he had to give up was his country of birth (Moon inconjunct MC).
This unbalanced Moon ruled his Ascendant in Cancer. Cancer is a water sign and going with the flow in order to survive. The sextiles and trines made it easy for him to join the ones in charge. And the most prominent object in the chart (Moon, calling, ruler 1) was square Ascendant to make it hard to care for others.

Charts are to be seen in the context of history, social situation, gender and genes. This man was a doctor in Nazi times. He believed that he was the member of a supreme 'race' and that all that he did was justified by just that.

This was one example of a nasty Pisces.

Joseph Edward Duncan III was a serial killer, dressed  up like a clown. I wrote about him before, in 2008.
http://astropost.blogspot.nl/2008/09/chart-of-joseph-edward-duncan-iii-and.html


III John Wayne Gacy
I don't like clowns, ever since I was a kid, and I know that I am not the only. This clown, John Wayne Gacy, was a serial murderer who was executed in 1994. He was a Pisces, born March 17, 1942. Here is the chart for the period of his first murder. He had transit Jupiter trine progressed Sun: a signal of success. In his eyes, he was lucky. And he was, because he wasn't caught and could go on killing.

The tightest aspect is a minor aspect: Venus sesquisquare Neptune. Venus is also trine Jupiter (a very narrow trine!). The combination of these aspects seem to indicate false romance (like fairy tale marriages, a big success on screen). Mars sesquisquare Pholus is also rather tight (frustrating turning point in activities or fights or... sex).

If you read his chart with the usual analysis, this is what you get:

1. Uranus and Mars are angular: short fuse on the horizon
2. Neptune is the planet of orientation (an idealist, ideologist, believer, artist or... someone who doesn't fit in the real world)
3. Movable signs and Sun/Moon in Pisces*) don't explain the killings, only the 'double' world that he created. Sun/Moon is opposition Quaoar and Neptune, illustrating being motivated by strange new fantasy worlds.
A sick person was born with key position for sudden anger and a fantasy world in the natal chart...

Every sign has examples of heroes and criminals. Pisces is no exception. The keywords of Pisces are:
cooperation, empathy, go with the flow, sacrifice, secrecy, miracles, idealism, imagination, fake, informal, no limits

But 'no limits' isn't limited to love...

A long time ago I had the birth data of 3 persons who misbehaved during WWII in prisoner camps. Apart from Venus-Pluto aspects I found that they had an overdose of placements in the water signs Cancer and Pisces. Going with the flow, or letting go is not always a quality of nice persons. Pisces aren't always sweeties. To describe persons like the 3 examples above as 'unconditional loving persons' would be far from right. However, perhaps, they really really loved their pet, who knows.

*) Sun/moon in Pisces
Motivated by empathy, compassion and illusions (dreams or ideals). Needs art, belief or spirituality to feel alive. Highlighted romance. The day dreaming member of the family who is isolated, listening to the music, watching television or in other ways out of reach until help is needed.

In a marriage: the romantic partner (with a risk to be desillusioned).
Example:
-      Thom Hoffman, actor and photographer with Sun in Pisces and Moon in Aries. Sun/Moon in Pisces is opposition Jupiter. See: http://art-astrology.blogspot.com/2009/06/astrology-chart-thom-hoffman.html
-      Ronald Reagan (Sun in Aquarius, Moon in Taurus, Sun/Moon in Pisces at Zero Aries, in hard aspect with Jupiter)

LINKS
About Sun, Moon, Mercury, Venus, Mars, Jupiter, Saturn, AC and MC in Pisces
About bias in the chart:
http://astropost.blogspot.nl/2010/12/bias-in-chart.html