ASTROLOGY CHART OF O.J. SIMPSON
The actor with a chart behind a chart!
And how about Cancer and Pisces?

How many astrologers have tried to read O.J. Simpson’s chart, I wonder? Not many. It is not surprising, too. O.J. Simpson’s chart, at first sight, seems to be that of the man he appeared to be, before he presumably killed his wife: a nice movie star. That is why his chart is such a good example. Why?
A. His chart shows the real meaning of Ptolemaic harmonic aspects . That is: "chance and opportunity", but not: ‘being all good and just’ (in total harmony).
B. His chart also shows the importance of the so called minor aspects and midpoint combinations. In this chart they show a very dangerous potential.

In short: Sun ruler 1 =Saturn(in 12)/Uranus; Moon in minor aspect with Mars, Saturn and Pluto, Ascendant semi square Mars/Pluto. At his particular time and place of birth the most individualist sports of the chart (ruler 1, Moon and Ascendant) were connected with the combinations of violent death, abuse of power and limited freedom. The beneficial Sun trine Jupiter in Scorpio on IC points at his violent fans at the background. They helped him stay out of jail, up to now.

The reason for mentioning O.J. is that O.J. Simpson faces the judge today. That is because he violently robbed a store a year ago (as he says to get back things that were stolen from him), with a few others. He was armed and dangerous. But see how harmonic aspects and having lots of money work! He was sent away on bail twice! O.J. Simpson is a good example of the way harmonious aspect work. What you see is not what you get with this chart and is not that in line with acting? And in line with Cancer/Pices, too?

For those who want to take a closer look with me, here is the rest of my story.

1. AT FIRST SIGHT: THE JUICE (Venus and Jupiter)
He has Venus oriental (square Aries Point) and Jupiter on the IC. This combination of prominent planets makes us think of success with women and with talents, perhaps of esthetic kind. He is a successful diplomat and has support (Jupiter) on the background (IC). 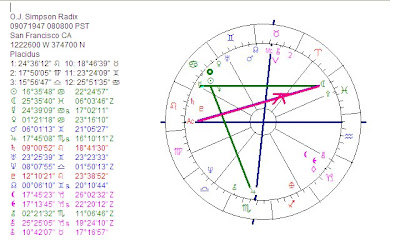 Moon trine Mercury and Sun trine Jupiter are the tightest aspects. The vocational routing (MC and dispositors) shows Venus ruler Midheaven, Moon in Pisces, Neptune in Libra and back to Venus...Artistic talents. His Moon Pisces and Sun Cancer with 50% in water signs give us an idea about the way he seems to go with the flow with ease. Who would see a violent man in this smooth chart? It is just as difficult to see for the astrologer as it is for the judge and the jury!

2. THE CHART BEHIND THE CHART 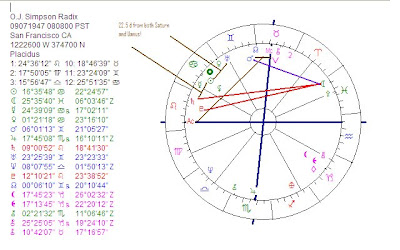 He was born July 9 1947 at 8:08 hour a.m. in San Francisco. At first sight, with a pleasant chart. But watch the aspect combinations that you would almost disregard. They add the possibity of having to deal with issues of violent death for the person that is born at that particular time and place. The Moon, the Ascendant ruler (ruler 1) and the Ascendant are involved in difficult combinations. It means that not everybody born on July 9 1947 had his violent habits. And even OJ himself did not need to have violent habits. He could have gotten therapy, had he asked for it.

A mixture of action leading to limited freedom and bad luck with regaining freedom and having success. That is what happened. He paid a few hundred dollars and was free to go until now. Again he did not have to stay behind bars.

Harmonious aspects made him successful in his job and in the way he managed to stay out of prison. O.J. Simpson stayed out of prison because of the fact that he had a lot of violent support. That is Sun trine Jupiter in Scorpio, ruler 1 trine ruler 5, for good luck. BTW The fifth house also is the house of performing (and he is an actor).

THE MURDER CHARGE
O.J. Simpson's life changed after his divorce. In 1992 his Ascendant and MC changed sign. His progressed Sun changed sign in 1993. On the day of the death of his wife and her friend, transit Mars was square his progressed Saturn and Pluto while transit Saturn was inconjunct Natal Pluto.

READ about BIAS AND PREJUDICE (and the benefits of them for some of us)
in my article on Astromarkt, about bias, where I also speak of Cancer and Pisces-influences. Of the 3 convicted extremely sadist concentration camp guards in WWII that I have the DOB of, all have a Sun and Moon in Cancer and/or Pisces, like O.J. has. It might point at 'letting yourself go' when circumstances permit or allow it and the character is weak. Of course, not all Cancer/Pisces are cruel or violent. It takes more than a Sunsign or a Moonsign. Still it drew my attention.
Another thing is, that all 3 of those camp guards were regarded as nice old people, loving their grandchildren. Should that double life have to do with double bodied signs like Pisces? I also noticed 'double life' in the case of Josef Fritzl - also a nice neighbour, as it seemed - with the Sun biquintile the ruler of Pisces (Neptune) and the Moon in Cancer.

He robbed someone in their hotel room, not at a store.