CHART OF FEMINISTS COMPARED TO PALIN's

What is a feminist? Can a housewife be one? Can an independent woman not be one? To find the answer I studied the charts of 3 well known women in the world of women's lib and compared those with the chart of Sarah Palin. I found a lot of Aquarius and Aquarian influences in all of them! So how can Aquarius/Uranus mean democrats? That is another post:) 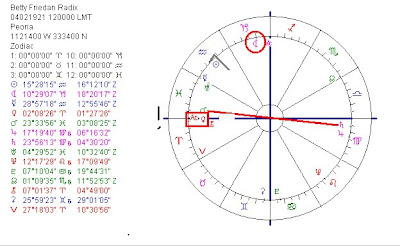 Betty Friedan died on February 4, 2006, age 85. She was born on February, 4, 1921 (no HOB available). I took a look at her chart to see if she compared with Aletta Jacobs, the first female student and doctor in my country. She was born 9th February 1954 in Sappemeer and she never married (she had a ‘free marriage’ and Venus septile Uranus). She received many threats in her life. So did her family members. 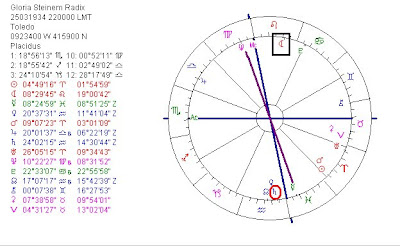 Today I read the blog of Gloria Steinem on LA Times.com, about Sarah Palin. It was written with passion. Gloria Steinem isn’t an Aquarian, like Betty and Aletta are. She was born on March 25, 1934 in Toledo USA at 22 hours, an Aries, with Venus in Aquarius square the Scorpio Ascendant. Gloria used to be a journalist and her first job was undercover playboy bunny:) With Venus square Ascendant a person sure looks good enough to do that! Venus’ position goes together with a Moon on top in Leo. Saturn is the oriental planet. Could the combination of Moon/Venus and Saturn indicate ‘women’s business’? With Mercury and Neptune in mutual reception, as end dispositors of the MC, her carreer was disposed of interaction between writing and vision or fantasy. 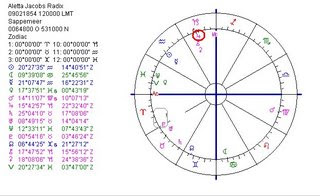 ALETTA was a realist and had energy at any level, since she had 50% of her placements in earth signs and no placements in fire signs. Jupiter was her oriental planet, Pluto was calling, so that the combination for success was prominent inher chart. She remained financially independent al of her life as a doctor in one of the first openly LAT-relationships in the middle class.

BETTY FRIEDAN
Betty Friedan was different. She, like Gloria Steinem, had the Moon and Venus prominent in her chart and the Sun was semi square Zero Aries: leadership.

It is not easy to find mutual agreement in the charts of these three important women and of course: feminism is not a vocation. Much of what they were doing depended on the situation, the time, their class and their gender.

DIFFERENT
Betty Friedan was a political activist with Marxist background. Aletta Jacobs fought for her individual right to be a doctor (and distributed means for anti conception). Steinem is still active and involved in politics (she votes Obama now) and was driven by the remembrance of her mother’s illness. Different women, different lives, different charts but united in the way they ment something for women’s lib! Was that on purpose? Because I see another thing that they have in common. They had a carreer of their own in times when women used to be a housewife…

AQUARIUS
Aquarius, in spite of what people want to believe now that the Age of Aquarius is near, is not the sign of liberty and freedom for all. It is for independence, and independence makes us free. But only if we want to. And it does not mean that others are equal to us and should be equally free, either. Some will always be more equal than others!:) Sarah Palin is an Aquarian. She is not a feminist.

PALIN
Sarah Palin has a lot of placements in Aquarius, among others: Sun and Moon. She has the Moon oriental, just like Betty Friedan. Venus on Aries Point draws attention, just like Steinem’s Venus. She can support herself and has a carreer of her own, even with 5 children. But she is definitely not a feminist, says a feminist. Or is she a very conservative feminist? Who knows. She manages to live the life of a mother and a top politician and only she knows how. With that, she seems to be the vivid role model of a liberated woman! She is an exception in the conservative world that she lives in. And that is typical for Aquarius: being different.

In my article about basic astrology on my site Astromarkt you find a rather harse characterisation of Aquarius:

You show having Sun in Aquarius by:
- being just a little different from the rest (of the family or neighbourhood)
- openly having another opinion than the group has
- revolt against suppression
- hearing, seeing and smiling (silence is not your style); being observant
- not showing emotions soon or trying to prevent it
- having to change everything every time
Like Placido Domingo, Neil Diamond and Oprah Winfrey, also Aquarians.

Moon in Aquarius: You have an independent soul and you sure do not like being obligated to have family meetings and so on. You may know a lot of people, but you keep a certain distance when it comes to emotions. Sometimes you have the nasty feeling that you can laugh about your own misery. As a mother you are more of a friend and sometimes distant, too. You seem to care more about situations far away or abroad than about those close to you.
Geplaatst door Astromarkt op 7:37 PM