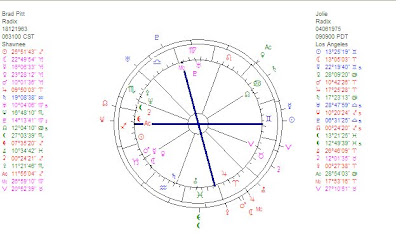 NEPTUNE (desillusion, gossip and isolation)
Right now, Neptune is close to the progressed Descendant of Jolie and at the same time close to the Ascendant of Brad Pitt. Neptune was also opposition MC in his solar return chart. Neptune is his oriental planet, so very important. Neptune often confuses and causes desillusion or isolation. Brad Pitt and Angelina Jolie are living apart right now because of their jobs (making movies in different places).
The other side is, that Neptune causes gossip too:) Sometimes it is amazing how newspapers and magazines manage to know exactly what Brad Pitt told Angelina Jolie...

It is clear that when Mars in a man meets Mars in a woman there is sexual attraction and competition (very stimulating when you are working together, although there may be a differant approach and method). But Mars is also the planet of aggression and anger...

The conflict between Mars and Mars is not the only astrological conflict. There are more difficulties to overcome in this relationships. For example, his Mercury square her Saturn, that will not make communications easier. Or his Pluto inconjunct her Moon, stressing the domestic situation that she needs. Mercury opposition Uranus on the horizon of the composite chart speaks of differences in opinion.

PS
Jolie's Venus square Uranus, ruler 1 square ruler 7 and Sun sesquisquare Uranus aren't exactly signs for a 'living happily ever after'. She divorced twice!
Brad Pitt is an atractive man. He has Moon conjunct Venus; he likes women. He has Venus sesquisquare Uranus for 'adventures' related to women. And there is that unaspected Sun in 1, drawing attraction at any level. And a romantic Neptune rising before the Sun. It won't be easy to be a faithful father under those circumstances. He divorced Jennifer Aniston.