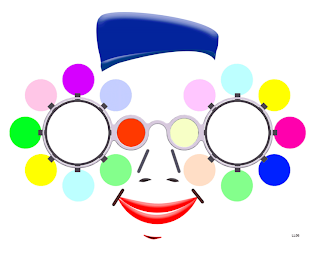 Venus adds sweetness, taste and sympathy. So what do you need when your Moon is part of a combination with Mercury and Venus (by aspect or midpoint)? I think that you need to have nice and elegant conversations, or flirtations, but anyway: you just need to talk to the ladies and you see kind persons around you. Ronald Reagan had this combination.

Moon, Mercury and Mars: that is a more competitive perception. When you have Moon with Mercury and Mars, would you need to talk about sport, action, men? Or do you have a habit of working and talking at the same time? I guess so.

I also suppose that with Moon, Mercury and Jupiter you need to talk a lot and have a big mouth sometimes. Or you are bluffing a bit. You see things greater than they are, perhaps? And you have a habit of telling the world what you think, like Hugo Chavez. This combination also gives a larger perspective.

A Moon with Mercury and Saturn is much more difficult to explain. It depends very much on the person's mental condition and mentality if this Moon has a habit of lying or is just being cautious in communications and with relations.

The Moon with Mercury and Uranus should hold the risk of construction failure but Steven Hawking has it (only if the time of birth is correct and there are doubts...), too and that is not the only reason why I think that it means a specific or special conception and the need to change ideas.

Moon with Mercury and Neptune has a colored conception and tend to 'color' events and memories. Fantasy moves in when Neptune is around. Poets might use the ability to see what is not visible for all, for art!:)

Moon with Mercury and Pluto tends to mention things in a way that others feel intimidated a bit or he/she has a habit of getting in trouble with what he/she says, especially when emotions get in the way.

Moon with Mercury and Ascendant is of course always talking and with Moon. This person is perceiving it all.

Moon, Mercury and Midheaven combinations: you long for (keeping) contact with the public or the clients.

I have mentioned Sun/Moon/Mercury combinations before, see this link. With Sun/Moon-Mercury a person is being motivated by communications (writing, talking, singing, being the messenger) and the perception (emotions+brains) will be highlighted and will draw attention. The example charts that I mentioned were those of authors like Agatha Christie and J.K. Rowling.