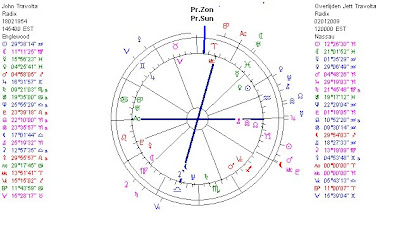 Those are the positions on the day that John Travolta sadly lost his 16 year old son Jett, at 10 a.m. on January 2, 2009. Notice that inconjunctions, the eighth house and Saturn are involved at the same moment. The eight house is the house of life and death. Inconjunctions (150 degree aspects) are related tot the eight (and sixth) house*). Saturn with Saturn points at the disadvantages of aging, responsibilities or...parenthood. All this together reflects a moment of lost and sadness.

Venus and Jupiter symbolize a sort of a comfort (when someone close dies you generally get a lot of sympathy and support).

JETT
John's son Jett was born 13 April 1992. On that day there were 5 (FIVE!) planets without Ptolemaic aspects in sign or orb 5 degrees. They are: Sun, Mercury (on Aries Point), Venus (oriental), Saturn and Pluto. Those 'calling' aspects reflect a lot of possible developments in either way (and possibly beyond control).
Jett's hour of birth is unknown. When he was born the progressed Sun and Midheaven of John Travolta afflicted Pluto, ruler of the 5th house (containing Mars, ruler of the 6th from the 5th). It was a year of meeting difficulties, challenges and problems to deal with.

The son of Travolta suffered from Kawasaki disease
http://en.wikipedia.org/wiki/Kawasaki_disease

PS: the progressed Sun of John Travolta is now conjunct the natal Sun of his son Jett. I had a similar experience when my sister died and her progressed Sun was conjunct my natal Sun. It means that life or illness of one person strongly influences and impresses the life of the other person.

*) 150 degrees from the Ascendant are the cusps of the 6th and the 8th house.

About the artistic talent in the chart of John Travolta...
Geplaatst door Astromarkt op 10:01 AM