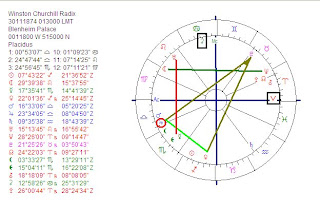 STEP 1
What does the chart show us? The Astro ID…
The first outer planet rising before the Sun is Jupiter, the international, symbol of the traveller, the wise guy, the academic, positive and optimistic person, someone who wants to make progress in life, someone who wants to grow (and maybe in horizontal direction). Go to Step 2 if you want to keep it simple. What we want is a cartoon, not a picture with pixels 8.2.

(BTW In the chart of Winston Churchill I notice the V on the descendant. Is not that funny? He always held his fingers so that he showed the V of victory. In this chart it is the V of the 'supposed to be' planet Vulcanus and that Vulcanus appears where the v of violence is involved. Maybe it is just coincidence, but it caught my eye.

Another special spot in the chart is Ceres on top. Ceres is the big mama, nurture, genes, seeds, roots and heirdoom. Later you will notice the importance of that placement. But let us skip Ceres and Vulcanus and focus on the more excepted objects in the chart. Let us have a look at the oriental planet.)

STEP 2
What is the character in general (Sun, Moon, ASC, tight aspects, if possible in combination
50% of the positions in fire signs and another 50% in fixed signs makes one think of Leo (fire and fixed sign): show, performing, leadership.

Sun in Sagittarius, Moon in Leo and ASC in Libra produce a fluent mixture of expression and leadership. Sagittarius is the sign of conviction, Leo likes to be the boss and Libra is the diplomat.

Interesting is that the Moon is trine Neptune and in Leo, for the need to have ideals and dreams, and to show them:).

The tightest aspects are Venus sextile Jupiter and inconjunct Pluto. Earlier we decided only to read aspect combinations and not to read aspects one by one. The combination of Venus, Jupiter and Pluto refers to great popularity, and success in art for example. Note that he was an amateur painter and a writer, too and that you see the pattern of artistic talents in this chart. If not, check the post on Art&Astrology.

SUM 1+2
We found a Jupiter/Leo/Venus-Jupiter-Pluto. Let us face it: we already get the picture of an optimistic and artistic popular leader. Let us not forget that when we do step three.

STEP 3: Vocations and goals
Now we want to know what he does for a living or what is the meaning of his existence.

In this chart we see a Cancer Midheaven with the Moon in Leo, Sun in Sagittarius and Jupiter in Libra in mutual reception with Venus in Sagittarius. Jupiter is sextile Venus (the tightest aspect, remember?).
We see joy (Venus-Jupiter), blessings and a great talent, in an atmosphere of ‘keeping memories and the past or habits alive’. Cancer refers to the domestic, national, educational and historical field: all that relates to ‘home’, ‘background’ and ‘memorizing’ /’reproducing’ (early education and basic needs).

We already had an optimistic popular leader with an international orientation with a successful career in the field of memorizing or reproducing. Notice that some patterns seem to be coming back again and again.

1. We see Cancer on Midheaven, square Aries Point: he will be known (AP) for his career and position (MC).

2. In the chart of Winston Churchill Mercury is square ASC/MC: this is the chart of a communicator, someone with a message to be written, spoken or sung (note that he was a brilliant author).

4. The “finger of God..”
There is an important Yod in this chart: Venus and Jupiter are inconjunct Pluto, making Pluto the axis of the Yod. The 'finger of God' is pointing at Pluto, the most elevated planet in the chart.Pluto is the symbol of sex, danger, money, force, influence, politics and strategy.
(This Venus-Jupiter-Pluto combination is repeated by Venus sesquisquare Jupiter/Pluto). He was successful and talented, but it is indicated that he was a politician or policy maker.

A popular and optimistic communicative strategic or political leader with an international orientation in a domestic or historical (Cancer Midheaven) field. And let us not forget that he needs to show off his ideals and dreams.
Once we know the social setting and when we know the historical circumstances and consider those with our findings in mind, it is even more clear how a talented and artistic nobleman with leadership and 'the finger of God' pointing at Pluto for politics could produce those words:
"We shall defend our island, whatever the cost may be, we shall fight on the beaches, we shall fight on the landing grounds, we shall fight in the fields and in the streets, we shall fight in the hills; we shall never surrender.". What made him say so: 50% in fixed signs for holding on and standing firm, 50% in firesigns for the drive and the pride.

WHY CONTROVERSIAL?
Why did Winston Churchill have such controversial ideas and why was his opinion often provocative?
It is because of the important Mercury in Scorpio square the rebel among the planets, Uranus. And also: have another look at the chart and see Ceres (genes, heirdoom) on top in Aries, reflecting the importance of breeding, seed, births and the homeland. That explains a lot of what he said and what shocked us.

RELATED
1. For a second opinion and another view I found one through Astrodispatch, by Michael D. Robbins.
2. Art & Astrology about the pattern of artistic talent in the chart of Churchill...

This is the end of the project 'Reading the chart of Winston Churchill', an example of how to interpret charts by use of a method and like if it was a project.

See Astromarkt.net for more background information about midpoints and for the basics of astrology or find other sources. And don't forget to buy books (from different authors) and/or have a basic training. Oh well, enjoy your study:)!