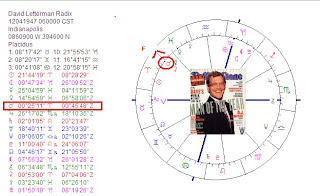 David Letterman (April 12, 1947, 6:00 AM according to Astrodatabank) confessed to have had sex with female employees. Three transit and progression by Uranus, planet of sensation within a few months mark a period of ‘being in the news’, The married producer,comedian and late night television talk show host (The Late Show) had been blackmailed (for 2 million dollars) but the person in question is under arrest now. Yes, David Letterman is in the news these days: see http://www.google.com/hostednews/afp/article/ALeqM5gCHwuP13kyuFj0E1qv-mmqzsTetQ

The planet of news and excitement is Uranus. There are three important connections with Uranus right now!
1. His progressed Uranus is now inconjunct his natal Midheaven. That means that there is a disproportional upheaval related to his career.
2. Transit Uranus is also conjunct his progressed Midheaven.
3. Late July there was a conjunction of progressed Sun and progressed Uranus.
For a VIP this usually means that you are the topic of conversation and mostly because something is being revealed about you. The amount of Uranus might turn his world upside down!

SUCCESS
Why is he so successful? With Sun biquintile Jupiter and sextile Uranus he is inventive in a creative way. The Moon's aspects (semi square Jupiter and inconjunct Pluto) might reflect difficult behavior**) but they also show successes with women and the public in general: he is a popular guy! Mercury trine Jupiter and sesquisquare Pluto provides him with a great vocabulary. The Sun, Mercury and Jupiter make aspects with Midheaven: that is reflecting success, too. There are many midpoint combinations indicating success, but the most important one is Jupiter opposition Venus/Pluto for a lot of money and ... a lot of success with women. Perhaps in a man's chart the effect of the money always goes together with success with the 'ladies'...:) He is a successful man earning lots of money and that is attractive for a lot of women, and for criminals!

MARRIAGE
Why is he so vulnerable for blackmail?
David Letterman is a married man. He divorced before. There are four important aspects reflecting possible divorce in a male's chart, according to the astrologer Ram. They are:
- Moon afflicted by Saturn
- Moon afflicted by Neptune
- Venus afflicted by Neptune
- Mars afflicted by Uranus
Conflicts between the houses 1 and 7 are indications for both genders. When there are 2 or more of such indications the chance of a broken marriage is rather high. David Letterman has Moon square Neptune and 157.5 degrees (sesquisquare + half semi square) Saturn. The same minor aspect is between Venus and Neptune. So, David Letterman has 3 of such indications and Jupiter (symbol of 'more or many') in the 7th house of marriage.
(Read the related post ‘How long will your relationship last?’ for more examples… )

PROMINENT MARS (Symbol of male sexuality)
Why did he DO it?
He has a very important Mars (symbol of males). He is 'sharp as a knife' by nature. In the progressed chart Mars is being accentuated and enforced by holding a position related to Sun/Moon (motivation) and AC/MC (crucial importance)!

Pluto also holds an important position in the natal chart of Letterman (square Ascendant and 'at the bottom' of the chart). But the most prominent planet is Mars. Mars is the planet of energy and drive. That is why Mars is so often important in the charts of entrepeneurs and soldiers, athletes and of men with a typical 'manlike' job.
Transit Mars was square natal Sun a few days ago and also opposition Midheaven. Transit Pluto (ruler of the 7th house of marriage…) was square natal Mars yesterday, challenging his marriage.

Mars, the planet of males, is very strong in the Astor I.D. of David Letterman because:

1. Mars is rising before his Sun and

3. Mars is also the final dispositor of Midheaven.

4. Mars rules his Sun in Aries

5. Mars is trine the ruler of Midheaven

In the progressed chart Mars (the chart progressed till today) Mars is also very important. Mars is conjunct AC/MC and Sun/Moon. That means that the qualities of the prominent natal Mars are being highlighted and are of crucial importance in this period of his life.

Apart from Mars and Pluto, there is also an important position for Mercury (half semi square Sun/Moon, reflecting motivation by communication) and for Saturn (sesquisquare AC/MC, reflecting ambition and management).

*) The image that Janduz had for this degree was that of a man with a bat and dressed up in a fur, let us say: the first idea of what a man used to be (a hunter, strong, etc.: the male prototype). One of the other interpretations is 'A woman has risen from the water & a seal has emerged also and is embracing her.' And that is rather the contrary, but when you combine the text with the picture you get something about the relationship between men and women and that is how humanity started producing itself:).

(I found another way to interpret the degrees: the Kozminsky Symbol (on Astrology Weekly) and that gives 'A ball of fire bursting across a rainbow'. Picture Mars in that bursting ball of fire and what you get is an explosion of energy. I like that picture of Mars on Zero Aries.)

**)A very difficult aspect in his chart is Moon inconjunct Pluto. More about that aspect in an earlier post..