Nompumelelo Ntuli, one of the 5 wives and 2 fiancees and numerous lovers of the insatiable South African President Zuma (born April 12, 1942 in Nkandla, SA)has been sent away and will never be allowed to enter Zuma's village again, because... she cheated on him. The unbelievable thing is that she did that when his progressed Sun was square natal Neptune, just after T Neptune inconjunct Neptune. Neptune is the symbol of deceit and isolation and of the negativepress, too. Also, transit Saturn is square progressed Sun (Saturn is the symbol of separation, the end of a period in life) and transit Pholus trine Mercury (mental turning point) with progressed Venus conjunct Juno. This final aspect combination makes me think that he willl soon find some consolation... 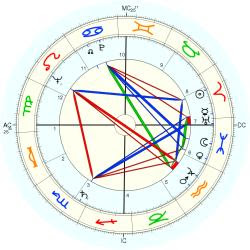 I posted about him before:

"Venus in Pisces is a flexible Venus in a double look-a-like sign. But Venus is also very sensitive, empathic and romantic in Pisces. That is why so many artists have Venus in Pisces or Venus related to the ruler of Pisces. (...) Hugh Hefner has Venus in Pisces and as Venus does not make any major aspect in sign or orb 5 degrees, Venus is 'calling'. We can clearly see that..."

Jacob Zuma has Venus 'calling', too and in Pisces, just like Hefner. The difference is that Zuma is allowed to be an official polygamist. The similarity is that both are rich men.

BTW I know of only one rich women with a number of tolerant lovers sharing her attention (but that was because they had to obey her). Her name was Catharina the Great. Read the story on my blog