The love life of Catherine the Great

Catherine the Great of Russia wasn't named 'the Great' because she was a great lover, but it could have happened. Many more of less unvoluntary lovers shared her bed. Now that it is almost Valentine it is maybe time to pay some attention to her chart. When I was in Saint Petersburg they told me that Catherine the Great (who lived in the Hermitage) had probably about 70 young lovers in her life. Later I saw a documentary about the erotic and pornographic art that she had hidden inside the palace. The Germans documented the works and there are still photos. However, the works have gone and was probably destroyed by soldiers who used them as a sort of a ' Playboy'. Who was that Great Catherine? 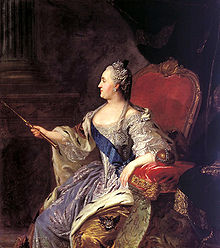 She was born in Germay, in Stettin, and she married Emperor Peter III of Russia. Later she divorced him. One week later he died. From that moment on she had a desire to be in the company of tall, young and blond officers, until days before she died at age 67.

I don't know if these officers had the desire to be with her, but they just had to.
What does her chart tell us about her love life, the many lovers and the exaggerated erotism?

a. Venus is conjunct Moon. She had a desire to be loved and a need for beauty, style and art. The more sophisticated side of that desire was expressed by teaching the people by means of expostions and libraries.
b. Venus and Moon were opposition Midheaven. That increases the importance of the needs.
c. Venus and Moon are in Gemini, the sign of 'more than one' and ' eternal youth' (like the young god Mercury, ruler of Gemini). She had a preference for young men.
d. Mars rises before the Sun in Taurus. This iron lady had a lot of energy and wouldn't be content with reading novels and embroidery.
e. There is a Yod with Pluto in the eight house of life, death and ...sex. Pluto is the apex in the combination with Mars and Saturn (together they are the combination of unnatural death - did she murder her husband? that is still the question). A yod is a combinaton of two inconjunctions and a sextile. The inconjunction of Mars and Pluto points at exaggerated use of power, money and influence. The inconjunction between Saturn and and Pluto shows the 'surviving instinct'.
f. The astrological equivalent of ' many'  is ' Jupiter'. This planet is in her fifth house of games, plays, entertainment, children, creativity and ...lovers.
g. I almost forgot to mention the tight Venus inconjunct Uranus. This aspect is mirroring an extraordinary (inconjunct) sudden changing (Uranus) preference (Venus). In other words: she falls in love again and again... Had she been an ordinary 21st Century celebrity, she would have married and divorced and been in the news because of her love adventures every now and then. See Astromarkt Astropost ('firework in the rollercoaster').
The two inconjunctions between planets related to sex and love life point at lack of balance (hormones, perhaps). Together with the prominent placements of the planets of love and sex (Mars, Moon and Venus) in aspect with Pluto (apex of the Yod) in the eight house of sex, life and death we get the picture...
Just like Henry VIII abused his power, Catherine did. She didn't marry her lovers, she 'only' used her officers. And perhaps she killed one husband, but she was very generous to her former lovers. One of those lovers was 40 years her junior. You see her chart and his natal positions (the transit positions) here: