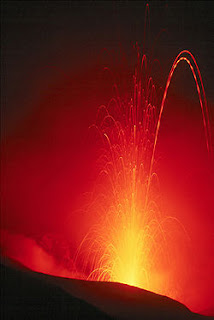 After watching a documentary about Iceland's vulcanos, I got curious. What in the charts of the days of the main erruptions in history would indicate the impact of these disasters, I wondered.
This post is about two catastrophic vulcanos: Laki and Krakatao (Krakatau in Indonesian) and my findings about the charts of those days. I'm sorry to say that the charts didn't correspond with the events (not at first sight). Vulcanos, like revolutions*), don't come out of the blue. Something is boiling long before we see the steam. Nevertheless, wouldn't you expect to see more firework in the chart below? The erruptions had a world wide and bad effect. The erruption of Laki caused starvation. The dust blocked the sunlight for months. It is possible that the erruption of Laki indirectly caused the French Revolution (food prices...). The Krakatao split Sumatra and Java and the wave even reached the Canal (between France and England!). The world temperature lowered 1.2 degrees! It was the greatest vulcanic erruption ever and we can only pray that there won't be another one. Read Wikipedia about Laki and Krakatao (use the links) and you can understand the concern about sleeping vulcanos today.

Every now and then there are predictions about disasters, revolutions, big wars and other nasty events. Those who predict them use to point at the positions of planets, for example a T-square or a Yod or a vital position at Zero Aries. But when there IS a disaster at world scale, there is no such indication! See the positions for Laki (inside the circle) and for Krakatao (outside the circle) and you may notice that the only correspondence is the 25th degree of Cancer and the beneficial Venus of Laki and Jupiter of Krakatao in that degree, conjunct the lucky star Procyon. Unless we are to believe that it was a big party to create a vulcanic island,  this is an astrological mystery. There is no tight aspect at all. (Please note that the position of the Moon is unclear (there is no exact hour). What in the charts of the most important erruptions shows that it was an event that had a disastrous global effect? There is nothing! It doesn't help to say that there is no exact hour (and no exact positions for the Moon,Ascendant or Midheaven), because the events shook the world and the oceans and the sky above at large scale. It was a day to remember for many and in many countries. It was the birth of a nasty dark and dusty period.

Maybe there is an explanation at another level (parallels, a combination of fixed stars with a midpoint, who knows) but nothing in the charts seems to warn us for what was to happen on exactly that day. If I didn't write more than 1200 posts here with another message, and if it was my first study, I would have doubts about the meaning of charts.

Conclusion: real big events (caused by nature) can't be 'predicted'' by watching the positions of planets, sun and moon and...the lack of tight and important aspects and positions doesn't mean that there will be no big event. 'Disaster' means 'des astres' (from  the stars), and I wonder which one...Or... perhaps I overlooked something? If I did, please tell me so. I'll be back on this subject after I studied the midpoint combinations.

*) See the earlier posts about Uranus in Aries and the French Revolution.

I decided to post the midpoint findings here. On both days there was a combination of Pholus, Quaoar and Varuna. In the chart of 'Laki' it was Pluto/Varuna in hard aspect with Quaoar. In the chart of Krakatau it was Quaoar/Varuna with Pluto. Is that enough? I'll be back:)