Coco Chanel in love and war 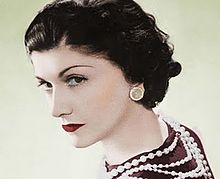 Lisa Chaney writes in ‘An intimate life’ about the relationship of Coco Chanel with a German officer in war time, during the occupation of France. It is not the first time, but again it is news. That might be the reason why transit Uranus is square her progressed Sun now (upheaval). The Sun-Uranus ('Aurora') aspect is also the link between her chart and that of her younger lover, Hans Gunther von Dincklage, born December 15, 1896 (his Saturn square her Sun). Most women who had enemy lovers faced an ordeal after war, but Coco was arrested and soon released (for unknown reasons). She went to Switzerland. She has Jupiter, in the 7th house, rising before her Sun for an international orientation when it comes to partners.
The famous lady of fashion and the enemy officer were an unusual couple. His Uranus is square her Sun. Her Uranus is square his Sun. I wrote about the Aurora-effect in Sun-Uranus synastry on Astrology&Love:
http://astrology-love-romance.blogspot.com/2011/01/aurora-and-sun-uranus-synastry.html
“…But, what if the partner is considered to be the ‘key to freedom’  in the eyes of the other? What if the partner ‘woke up’ his lover after a long, long and boring sleep?” and “Some persons want to have a different kind of life (than their parents had, for example) and – not deliberately -  choose the less resembling partner, the complete stranger, to liberate and alienate themselves from their backgrounds. How long could this have been going on? Until 'liberation day', of course.” Their Venus are 165 degrees apart. Venus quindecile Venus shows an obsessive love...
Her chart shows that there is a possibility of an affair starting in 1941. When she met him, in 1941, her Progressed Venus conjunct Midheaven reveals the love theme, but there was more. Progressed Sun square Jupiter and Transit Saturn inconjunct Midheaven and Ascendant show progress (she sold her products to the Nazi’s) and a crucial fault (see: http://entertainment.timesonline.co.uk/tol/arts_and_entertainment/film/article6027932.ece about her in war time). In the Art&Astrology post about Audrey Tautou, who played the role of Coco Chanel once, I wrote about the talent in the chart of Miss Chanel:

“ Coco Chanel had other kind of talents. She was able to lead a company. She started her career with an affair with a very rich man, while working at a tailoring shop. Maybe that is why Mars (men) is crucial in her chart? Another important planet is Jupiter. Jupiter is the first outer planet rising before the Sun. And last but not least there is Pluto. Pluto does not make major aspects in sign or orb 5 degrees. That makes Pluto important, the 'calling' planet. We see Mars, Jupiter and Pluto prominently placed in her chart. The combination of Mars, Jupiter and PLuto is an indication for a lot of energy and enterprise and a sign for success. Besides:

1. Moon is in Pisces for sense for 'la mode', fashion

3. Libra is on Midheaven for a career related to style and diplomacy

4. Uranus and Pluto are related to ASC/MC, signifying crucial and dramatic changes in life

5. Pluto is related to Sun/Moon and Pluto is in the 5th house of creations and fun

There is one important thing in this chart that points at fashion (or any other branche related to the basic needs of menkind, like clothes, food, having someone to take care of you as a child and edcution). And that is the Moon. The Moon is the first planet that will be 'hit' by the Ascendant on the day of birth. The Moon is standing apart from the other positions in the chart. “

Recently I wrote about bachelors and Virgo. There is no Virgo in the chart of Coco Chanel, except for the ruler of the 7th house. The Black Moon is on the Midheaven. Funny thing is, that Lilith is the mythical 'runaway bride' of Adam and that she never married. But she may have had a long lasting and late relationship with Von Dincklage. I find it interesting that she never married and yet has Jupiter in the 7th house. There is no key for marriage or divorce, except that Jupiter in the 7th house and Sun sextile Mars shows that she is independent enough to be her own 'man'. Jupiter represents the ‘lot of’ , ‘more’, ‘social improvement’ and ‘international’ or ‘traveller’. She went to Switzerland, probably with her German lover.

In 1956 she returned with transit Neptune conjunct Midheaven (and that is the symbol of isolation). The French didn’t want her back then. But her success in the USA eventually made everybody forget about the war.

All is fair in love and war, they say. Did And Coco Chanel knew all about that?

Here is the chart with transits and progressions for now (Uranus and P MC with Pluto mirror, even after death, that there is 'stress' around her and her reputation).

LINK
http://astropost.blogspot.com/2008/06/neptune-and-pluto-combination-of-silent.html
Her Sun is square the midpoint Neptune/Pluto, the combination of the silent force in the charts of mediums, illusionists, mythical persons, writers of mysterious books and ...spies. Generally, people who know how to keep a secret.